Trying, as ever, to maximise the length of our weekend away, we arrived into Bucharest late on a Wednesday evening. Our initial research was promising – Bucharest looked to be a lively place with several craft beer bars open til 2am, so we would be able to get straight out beer-exploring. A short walk from our hotel, Craft si Draft seemed like the best place to start, but on arrival at midnight we found it completely closed up, a characteristic which occurred as a running theme through our various adventures in the city, reader take note. Alas, we never got around to returning, but fortunately Beer O’Clock, located on the same Old Town strip, made a slightly better effort at adhering to its ascribed opening times, and the friendly bartender served us our first taste of Romanian craft beer.

Beer O’Clock has a simple, pubby feel to it, classic wood-panelling and traditional drinking-establishment furniture, and a solid international beer selection. It is certainly the best drinking option we found in Bucharest’s rather touristy Old Town, which was much more rowdy and tacky than we’d anticipated, arriving with the somewhat misplaced illusion that this was still an undiscovered corner of Eastern Europe – oops. Being very internationally focussed did mean that Beer O’Clock didn’t have as many Romanian beers as we’d have liked, and they only serve most of their draft beers, even the very boozy ones, only in pints, which is not ideal. That said, we tried four Hop Hooligans cans there, all of which were very tasty, particularly the gently lactose Milky Sourpuss Cherry Sour and lip-puckering Salty Sourpuss Cucumber Gose – an excellent start to our trip. Service was helpful and friendly, particularly when compared to some of our subsequent bar visits, and should you suddenly need a taste of home, thy have a substantial oeuvre of British beers, as well as Belgian, German and other European brews. They did close up at 1am, not 2am as advertised, but thankfully weren’t in a hurry to kick us out. Certainly worth a visit. http://www.beeroclock.ro/

We resumed our beeradventures the following lunchtime, after visiting the beautifully restored Choral Synagogue. Caru cu Bere (the beer wagon) has a sterling reputation for local beer and cuisine, located in a beautiful Art Nouveau building in the old Lipscani area of the city. An inn has existed on that site for over 130 years, and the beer was originally transported in on wagons, so the story goes. Based on the recommendations we’d received, our expectations were high and we’d even remembered to book a table (!), so it was disappointing to find that the food was a little flavourless, the house beer was pretty average and the service was bordering on rude – the classic complacency traits of an established institution which doesn’t need to work for its business. The building is, indeed, rather beautiful, but that’s pretty much all I’d bother visiting for. https://www.carucubere.ro/en/

After a good ol sightseeing jaunt around Lipscani, we headed to Fabrica De Bere Buna, the downtown taproom of Zaganu Brewery, one of Romania’s oldest microbreweries which opened in 2013 and is based near the Carpathian Mountains. Fabrica De Bere Buna has been open since 2017, serving Zaganu’s brews alongside select Romanian guest craft drafts and bottles, and is a chic hipster spot with trendy, beer-focused décor, moody lowlighting and a spacious upstairs deck. Their draft beers are available in flights of four, which will set you back about £10 (50 Lei), which includes a bowl of nuts – always a welcome addition. I was very taken with the super-smooth Double Rye IPA, which had a lovely light but velvety texture to it, and the mega-hoppy 500 Imperial IPA, a malty, resinous boozy 10% monster that reminded me why I’m so over NEIPAs! We also tried our first Ground Zero beer here – the Morning Glory IPA, which started out well but developed a bit of a herbal tang as it went on, as well as somewhat disconcerting me with it’s Brewdog-esque marketing spiel. Hmmm. Having been pretty chilled when we arrived at about 5pm, Fabrica was heaving by the time we left about 90 minutes later with a mix of tourists and hip young locals. Staff were polite and having table service was a nice bonus for our aching post-sightseeing feet! Cool beery fun.      https://www.bere-zaganu.ro/

Fast-forward to the next afternoon, when we went back on the beertrail after visiting Ceausescu’s Spring Palace, slightly dazed by the crazy opulence of the former dictator’s home. The Beer Institute is a gloriously well-stocked beer emporium selling a huge range of Romanian delights. There are two branches, both slightly to the north of the city centre, and the one we visited was located in a super chi-chi shopping mall, tucked between high-end restaurants and posh clothing boutiques. Our pleasant, relaxed bartender was unfazed by my careful examination of all the wares on offer before going in for the kill, and presented us with nice fancy glassware and drinking water (unlike most bars in Bucharest). I was a big fan of Wicked Barrel’s NSFW DIPA – dank, slightly murky-in-a-good way and piney-hopped, and couldn’t resist the wonderfully named Delicate Psycho from Blackout Brewing – we had the Galaxy dry-hopped version that was a little more grapefruit-citrusy than I expected, but still most tasty. https://thebeerinstitute.ro/

We also got some killer brews to take away – the Hop Hooligans Who’s A Good Boy? IPA with flaked oats, habanero and Carolina reaper has got to be one of my absolute-don’t-miss Romanian beers, the combination of smooth, fresh peachy oats and subtle smoky chilli that builds is just top notch – wish I’d bought more! I also picked up Oriel Brewing’s Mezcal BA Quad – their highest rated beer on Untappd and for very good reason – it was a sublime silky rich luscious brew, sweet, warm and woody with gentle smoked mezcal notes that even JB ‘I don’t like Quads’ could not get enough of. Get you some of that!

About a 20 minute walk from The Beer Institute, we found The Real Beer Store, a super-cool beer-nerd-friendly emporium with an expertly curated selection of local and international brews (think De Molen to Evil Twin!). We had a lovely chat with manager Vlad, who filled us in on the local beer scene and answered a lot of our questions, including why craft beer costs basically the same in bars as it does in bottle shops, and why it is so expensive compared to most of Eastern Europe (both related to limited demand). My favourite beer we found there was the mega-collab-genius Tetraphobia from Bereta, Wicked Barrel and Hop Hooligans – an insanely tasty blackberry-elderberry lactose DIPA that is perfectly balanced and incredibly moreish. One characteristic of Romanian craft beers that struck me was the restrained use of lactose, creating a rich texture rather than a full-on sugary milkshake experience, which in my opinion works brilliantly and I hope to see more of in the UK and US markets. We also stocked up on goodies to bring home, got the lowdown on which UK breweries are most popular over there (Cloudwater came top, no surprises!) and had a generally brilliant time. Make sure you pop in and see Vlad if you’re in Bucharest! http://craftbeer.ro/

We felt almost obliged to visit Bucharest’s Mikkeller Bar, because, of course, it is a Mikkeller Bar, although it is in a bit of a remote location quite far from most other nightlife. Ubers are relatively cheap, so off we went after an amazing meat-tastic dinner at Zexe’s (do not miss! This is the real deal, not the touristy junk you get in the Old Town). While the décor at Mikkeller was chic and inviting, we were immediately eardrum-blasted with ghastly blaring ambient techno which did not chime at all well with beer-drinkin on a Friday night (as a follower of Pete Brown’s beer and music pairing, I know there’s a time and a place for this, but trust me – this was not it).

That said, they had a good range of local beers plus their own and a few Scandi friends in the mix, with a total of 20 taps – not too shabby. My favourite of our flight was locally brewed Bereta Beer’s Escape IPA, which pulled off a trick of Houdini-ish proportions by successfully putting coconut into an IPA! Aside from the inappropriate music, we were also a little surprised to find the bar almost empty on a Friday night. Despite the location, we had assumed that the name would be enough of a draw for the substantial number of tourists around the city as well as locals, but this was not the case. Aside from one other couple, the only patrons were a small group of guys who seemed to be the bartender’s mates, which may or may not account for his noticeable inattentiveness. Ho hum. One to tick off the list, this – and bring earplugs just in case. http://mikkeller.dk/location/mikkeller-bucharest/

Our final stop on our beery travels was 100 De Beri, another pub-like beer bar in the Old Town, notable for having its own Untappd badge and a decent (albeit certainly not 100-strong) selection of local and international beers. Service is beyond surly and many of the beers advertised are not available. We did not linger after or bartender was rude to the point of aggressive, but the silver lining to the experience (aside from the Untappd badge) was getting hold of the brilliant Hop Hooligans’ Small Talk Big Brew, a complex, creamy-oat, fragrant-hopped delight of a DIPA – so good I had to take one back as a gift! Choose your brew wisely, get the badge and leave them to their misery. https://www.facebook.com/la100deberi/

Before I leave y’all, it would be remiss of me not to give a huge shout out to Dianei 4, a beautifully reclaimed ramshackle mansion from the 19th century – we absolutely loved this gorgeous restaurant and cocktail bar with superb service, the best brunch in Budapest and a house cocktail so gorgeously moreish you will never want to leave. Go there any time of day, they are just brilliant. We also loved Walkabout‘s free city walking tour – three hours of history, culture and insightful political commentary passionately delivered in English that’s better than mine – highly recommended.

Bucharest may not be the easiest or cheapest of European cities but there are some awesome spots to visit and killer brews to drink. The beer scene is young, but it is ambitious, experimental and certainly exciting. Enjoy! 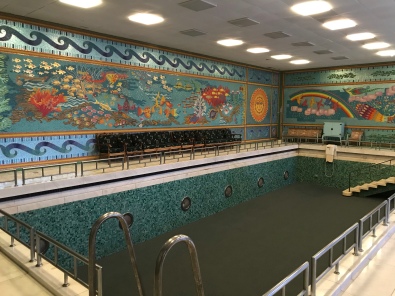