It really does feel like craft beer is living its best life in London at the moment. In the short time we were back this winter, a veritable feast of exciting bottle shop and taprooms opened their doors, leaving us absolutely spoiled for boozing choice! Most interestingly, many have chosen locations that have, up to now, lacked a reliable craft beer source, tapping (ha) into new pockets of London drinkers and, for me, providing an excellent excuse for some beery travels. And what better time than Tryanuary to get out and about, visit some different areas of London and support these brilliant new venues, all of whom are clearly dedicated to offering high quality, diverse beers from craft breweries far and wide to London’s increasingly sophisticated beer palate? 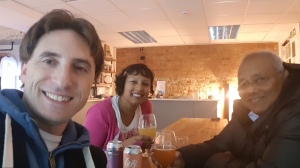 Twickenham now has a its very own drink-in craft beer emporium extraordinaire! Brewery Market, which opened last Autumn, aims to ‘engage and inspire the senses’ with a bold and varied range of craft brews from around the world, beer and hop-based beauty products, beer glasses and even beery doggy treats. Brewery Market has something for everyone, whether you’re new to craft beer and want to start gently, or are an aficionado looking for a special treat. With eight taps and a wide selection of cans and bottles from the UK and abroad, Brewery Market happily mixes up supporting local breweries and offering some of the finest international craft beers on draft, particularly from the US. Where else in London could you hope to find Hardywood’s mammoth Kentucky Christmas Morning Imperial Milk Stout on draft? Not to mention cans of Evil Twin’s Imperial Biscotti Chilli Hazelnut Break, an absolutely phenomenal beast of a spicy Impy Stout! We also love the super-hopped Garage/Barrier collab That Chihuahua IIPA and lush, juicy Omnipollo Pleroma Raspberry Crème Brulee Sour (yes, it really works) to name but a few. 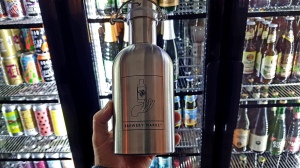 Brewery Market’s interior is cool, chic and stylishly lit, with plenty of space for both drinkers and their canine friends. Linda, Nick and Denis are hugely well-informed and passionate about craft beer, so that whatever your palate craves, you’ll certainly be able to find something here. If you’ve ever been to Twickenham before, it’s definitely time to visit gorgeous, Old-World Church Street for some modern, exciting craft beers, and if you’re local you’ve been blessed with a top beer venue on your doorstep. Fill your boots, fill your (beautifully branded and environmentally friendly) growlers and don’t forget to bring your dogs along to make friends with Pepper!

Our first visit to Callow Ruscoe was just a week or so after it opened. Situated on a busy (but not previously beery) section of the Wandsworth Bridge Road, this intriguingly named venue made an immediate positive impression, with chatty, knowledgeable owner Matt introducing me to my first taste of cool French brewery Brasserie Popihn with their delicious Citra DIPA, a 9% stunner that was so fresh and well-constructed it went down a scary treat in the middle of the afternoon. What was supposed to be a swift stop-in ended up lasting a couple of hours, as we were kindly invited to join a Siren Caribbean Chocolate Cake vertical taste by a couple of fellow customers (and new beer-friends) and whiled away a happy afternoon chatting away and measuring the merits of each version (my fave was the barrel-aged, but they all rock). We also tucked into some smashing brews from the likes of Crak, Unbarred and Brekeriet – if you get the chance to try Crak’s Giant Guerilla DIPA get right on it, I can’t recommend it enough.

Our second visit was for a Moor Beer meet the brewer Tryanuary event, which was also great fun. James talked us through Moor’s history and brewing process, explaining the significance and challenges of brewing unfiltered beer, and the brewery’s many achievements, while we tasted samples from their core range and seasonals, including a can/keg comparison of Claudia Pale Wheat (I preferred the can, unusually), the impressively flavoursome Dead Punk All Dayer Session IPA (just 3.5%!) and the absolutely dreamy Fusion Barrel-Aged Old Ale – be still my heart! 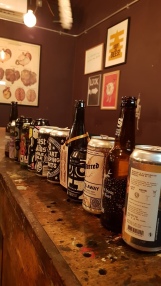 I can’t deny that I was immediately sold on the name here. In fact, if I were ever to open my own beer shop, I’m not sure I can think of anything better. Coupled with the fact that I arrived at the Ear at the end of a rather unfortunate day, it was indeed good news that the venue does live up to its name. While I wasn’t exactly unburdening my woes (on this occasion!) to the friendly bartender, the Ear has a relaxed vibe with comfy sofas, low lighting and oh yes, a smashing selection of beers, as well as wine and gin. Our group of four were delighted to find a more than enough mouth-watering brews to keep us occupied well into the evening. It was especially nice to try UK beers from the likes of Black Iris, Boundary, Marble, Brew York and Staggeringly Good (all of which were excellent) that aren’t always easy to find in London.

My first taste of this year’s Magic Rock Unhuman Cannonball was another welcome treat, and their collaboration with Brouwerij De Molen, BA De Mole, lived up to its spicy, boozy hype. We were also very keen on Canopy’s Amaretti Imperial Stout – a lovely smooth, subtle, sweet, nutty flavour and so limited in availability they had sold out at the brewery! Just a short walk from Brixton station, and close to both Canopy and Bullfinch breweries, the Ear is in a great spot, cementing Brixton’s growing status as a craft beer destination. With ten beers on draft and impressively competitive pricing, I can easily see the Ear becoming my go-to spot in this part of town. Because everybody needs a Sympathetic Beer.

Grin and Beer It

Y’all can imagine my excitement when I discovered that a craft beer bar was opening up just yards from my North London apartment! Sadly, I don’t actually live there any more, but this didn’t prevent me sneaking in a swift visit just hours before our flight back to Texas – for research purposes obviously. Grin and Beer It has a prime spot on Blackstock Road, in the heart of Highbury Barn and a short walk from Arsenal or Finsbury Park stations. With six beers on draft and a flight of third-pours of all six for a deliciously affordable £10, as well as wine on tap, spirits, snacks and a lovely cosy basement complete with board games (the Board Game Cave, no less!), Grin and Beer It looks to be exactly what my leafy old ‘hood has been lacking. The super-friendly team behind the bar were brimming with enthusiasm for their days-old enterprise, and we had a nice chat with them over a swift bottle of Tempest’s rather scrumptious In The Dark We Live Black IPA as they closed up.

The beer selection includes local London fare as well as popular UK breweries including Weird Beard, Lost and Grounded, Cloudwater, Hop Stuff, London Beer Co and Tiny Rebel. While there isn’t that much from further afield at this stage, there’s certainly enough choice to keep the beer drinkers of Highbury busy, and encourage them to hang out and play a board game or two. It’s also in a very convenient location for visitors to the Emirates who are looking for a pre or post-match boozer to whet their whistle. I for one am very glad to know that on my visits home, I’ll be able to pop across the road for a bit of beer-chat and a fridge re-stock, and hopefully on my next visit I’ll have time for that flight!

And finally, an oldie but a goodie… 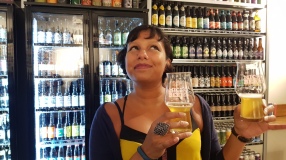 For me, the advent of Micro Beers in East Sheen in late 2016 made a massive impact on my life, as up to that point I was, rather literally, carrying my beers in on the train from North London. Not only has Micro Beers done wonders for my back (I am a beer mule no more!) but Sean and his brilliant, ever-evolving team, have created a space where not only can we enjoy top-class brews from around the world, but where the local craft beer community can congregate, chat and mingle. As a long-time Highbury resident, the move south wasn’t easy for me, but as Micro Beers became my home-away-from-home I’ve got to know so many fab beer-folks in the area, attend some superb tap takeovers (Lervig and Modern Times, to name just a couple!) and even had the privilege of hosting an event there myself (thanks again Sean!). 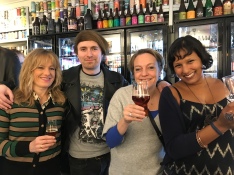 This Tryanuary, I was so glad to make it to their Fullers tap takeover-meet the brewer-beer launch event with fantastic Head Brewer, Georgina Young. Fullers’ collaboration with Northern Monk, KCBC and Earth Station (with a little help from the Brewer’s Journal), the smooth, subtle and moreish Congress Coffee Porter was the beer in question – brewed just down the road in their Chiswick headquarters. The place was packed and full of friendly faces, and as well as having the pleasure of chatting with Georgina, we got to try some absolutely choice Fullers beers, including vintage ales from 1999 and 2009 – we were properly spoilt! Today’s announcement aside, this was a heck of a way to celebrate Tryanuary, brilliant new (and old) local beers at a local venue.

Now in its third year, Micro Beers is going from strength to strength as purveyor of fine beers and centre of the local beer-drinking community, and I wish the same for each of these venues and their patrons. Taking part in Tryanuary and helping to support your local craft beer shop at this difficult time of year for them does make a difference – there’s a whole week left to try something or somewhere new, and I would highly recommend each of these venues as an excellent place to start. 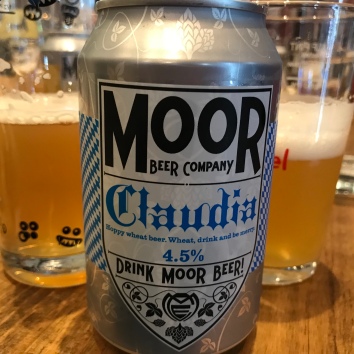