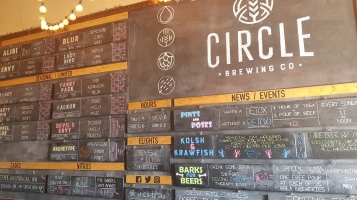 Circle might appear to be one of Austin less obtrusive breweries, but start looking out for their beers in Downtown bars, restaurants and music venues and you’ll begin to notice that, while they may not be shouting, they’re certainly being heard. Even as I sat down to write this, I thought about how often I’ve drunk Circle beers and where, and it struck me that they have quietly established themselves as a bit of a go-to brewery despite only canning since last year (they’ve been brewing since 2010).

Out on the far end of the North Austin brewery circuit, Circle’s taproom is cute local spot, mixing up pub and warehouse aesthetics, a little bit wood, a little bit chrome. Circle’s founders are out-of-towners (hailing originally from Nashville) who chose Austin as the home for their brewery, and they clearly take community seriously, hosting local fundraisers and family-friendly events, as well as proudly brewing their Beer For Beto (hoorah!). As a fellow adoptive Austinite, this makes me smile. On that note, in a town where the craft beer scene can be oppressively white, I noticed on my visits that Circle has one of the most mixed crowds I’ve come across in an ATX taproom. How much of this is a direct result of their community outreach and how much a reflection of their location slightly further out of town I couldn’t say, but it certainly made a welcome change.

Circle has a strong core range, including the suitably creamy Archetype English IPA and the big banana-clove Blur Texas Hefe. They also get extra points for naming a beer after the one and only Lady Bird Johnson (you don’t get much more local than that!) and a great beer too, their lovely hop-forward American IPA. Win. Nevertheless, I am also a big fan of Circle’s seasonals. I still have beer-dreams about their fabulous Zoot Suit Habanero Stout which was so spicy it made my lips tingle! They really, really need to brew more of this. Please! The Rye-Barrel-Aged Envy and Doppel Blur out-takes of their core beers were also big successes, and I am keen to see what’s new in the taproom. Flights come in pours of four but aren’t available at special events. Our first visit was for their Circle of Soul block party, which was pretty relaxed in the afternoon but the super-friendly folks we chatted to indicated it was the place to be after dark – sadly we weren’t able to stick around but hopefully next time! Taproom hours are Thursday-Sunday (day-dependent) – if you’re up in North Austin, Circle certainly is worth seeking out. 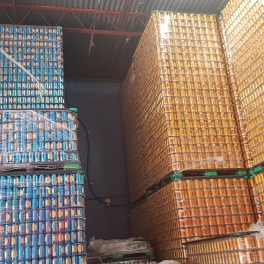 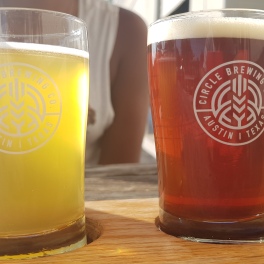