Update: As of January 2019 NLand Brewing and surf park are both closed.

We drove to NLand on probably the hottest day of the year so far on the promise of tubing on the ‘surf moat’, live music, entertainment, and of course, checking out all the beers. The surf park is the only one of its kind in this part of Texas, purpose-built with a mechanical wave machine to mimic the sea. It’s pretty cool to watch.

We were pretty disappointed on arrival to find that tubing needed to be booked in advance, key information that wasn’t provided in their promotional material, so settled down instead with a flight in the shade. While the beers were all drinkable enough, we weren’t really blown away by anything on what was clearly a fledgling list. Bar staff were also distracted and not especially knowledgeable on the beer front, and we definitely got the feeling that this is somewhere for a post-wave bevvy rather than a beer destination in itself. Their efforts to master different styles of pilsner were encouraging however, with the unusually creamy pre-prohibition the best of the bunch. The red ale was also acceptably quaffable, although we were disappointed that the only IPA on their menu was off, which seemed poor planning in advance for a party and not up to the standard that we’ve become accustomed to in Texas. Similarly, the live music consisted of one small stage, and there were a couple of stalls selling surf merchandise and CDs.

It is a really nice idea to have a brewery in a surf park, but the beers did feel like something of an afterthought to the very ambitious project of the surf park itself, and they definitely need to work on their event planning. While we were glad we visited, NLand isn’t a beer nerd’s brewery. That said, it’s good to know that Austin’s surfers won’t be going thirsty. 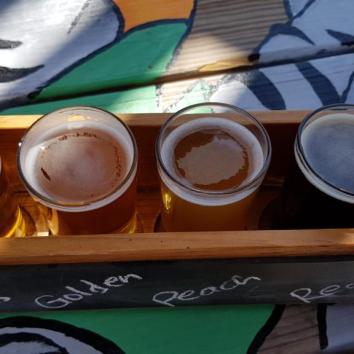