Sleepy ol’ Lockhart is famous as the barbecue capital of Texas, home to Black’s Barbecue which has been proudly serving Texans since 1932. It’s the oldest barbecue joint in the state and still run by the same family. The food is tremendous, but there’s enough competition to have set the town’s identity, and we’ve been told there are tour groups who visit up to five barbecue restaurants in a day. Ouch. We too have been guilty of breezing into Lockhart, filling up on top quality smoked meats and leaving again, but the arrival of Caracara Brewing has given Lockhart’s gorgeous town square a new and exciting attraction.

We first came across Caracara in May at a community festival in Leander, Texas where proprietor Mike Mann had a stall selling Caracara’s original two beers, the Here and Now Citrus Wheat and On The Square IPA. Caracara is, in fact, right on Lockhart’s main square in an ideal location to welcome both visitors and locals, and a lot of care has been taken to design a space with both modern and traditional elements, reflecting Lockhart’s lovely 19th century architecture but also the relative newness of the building it’s in, capturing a pub atmosphere with just a hint of hipness. The brilliant lady serving us was exceptionally knowledgeable and enthusiastic about all six of the Caracara beers that were on tap during our visit, as well as their guest taps of cider and mead, and even made a cup of coffee for JB which was very much appreciated. Flights come in fours in very cool metal baskets, and during happy hour which lasts til 7pm, these cost a mere $7 which was extremely good news indeed! As well as the excellent aforementioned IPA, we especially enjoyed the Le Peche Saison, brewed with fresh Fredericksburg peaches for a smooth, farmhouse flavour and the chocolatey Plum Creek Porter that was light and creamy on nitro.

Arriving relatively early on a Wednesday evening we watched as the taproom filled up with a healthy post-work crowd. Caracara has taken a fair bit of trouble to provide more than beer to keep folks entertained and we were impressed with the weekly schedule of activities, including bingo, karaoke, live music and a shrimp boil! They also have a substantial array of board and card games on hand, which seems, happily, to be becoming de rigour in taprooms in and around ATX. Like Seguin Brewing, Caracara has seized the opportunity to bring locally made craft beer to both residents and tourists, sensibly situating itself in the heart of town and creating a vibrant social hub with the warmth of a local pub and high quality beers brewed on site. We’ll be back to Caracara and next time I will definitely be doing the karaoke! 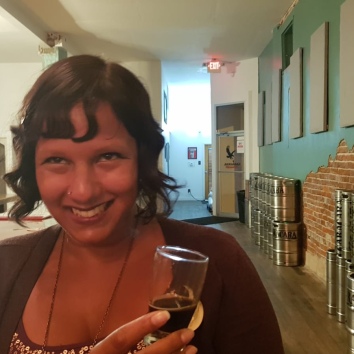