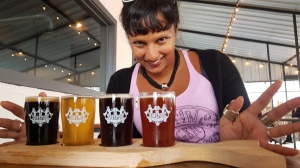 Southtown is one of my favourite areas of San Antonio, still retaining its traditional local charm in the face of constant development incursions, and home to several micro-breweries, including Kunestler and Dorcol. Dos Sirenos is the newest taproom to open in the area – just a week old at the time of our visit, occupying a large lot amid new apartment complexes and older houses just off South Flores. The taproom is spacious but simple and a bit plain and lacking in décor, although there is shaded outdoor seating and a yard for dogs and children to run around in. There is a restauranty feel to the place, with table service and a menu of bar-food standards, including children’s dishes, and there are screens positioned absolutely everywhere which I find a bit oppressive but makes this a favourable place to visit on game day. 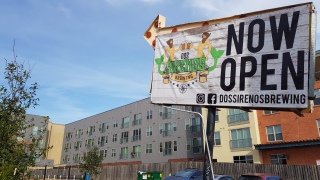 Dos Sirenos had seven beers on at the time of our visit, one of which had just been released that day, which is pretty decent for a brand new taproom. The menu has a strong focus on Belgian and German styles – not what you’d expect from a brewery with a Spanish name! As well as a Wit, a Weiss, a Bock and a Belgian Ale there were two different Hefeweizens and not an IPA in sight. Unusual, but no one seemed bothered. Our flight of four mixed up the least similar of the bunch, and I was impressed with the dry, full-bodied 104 Bananas  – a banana-forward Hef that had a firm, chewy banana-chip quality belying its 3.7% ABV. I also really enjoyed the Amaltheia Bock, which was full of smooth toasty malt and went down much too easily for an 8% beer. The Winter Ale on nitro was decent with lots of dried fruit flavour and the Morpheus Imperial Stout ticked all the boxes but didn’t bring anything new to the party. We were somewhat put off at the unreasonable surcharge on flight pours at Dos Sirenos – a hefty $5 for their higher ABV beers. While craft beer bars can get away with those kinds of upcharges, it’s pretty cheeky for a brewery to try it in their own taproom, especially with beers that aren’t barrel-aged or limited edition. This further cemented our feeling that this isn’t somewhere to visit for beer-tasting and is far more geared up towards folks kicking back with pints for the afternoon.

Dos Sirenos feels like it’s carving a space for itself as a local go-to, and being positioned in such a residential area it certainly has the scope to act as a walkable one-stop family-friendly destination. They seem to be tapping into this market effectively already as it was comfortably busy during our visit, with most folks there in large groups eating, drinking and watching the football. No, this isn’t really my kind of taproom, but I’m sure it’s a welcome addition to the neighbourhood and if you are passing it’s worth checking out a beer or two. 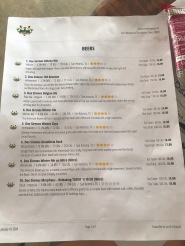