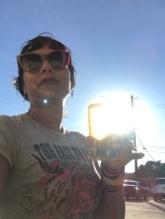 We checked in at Hop Squad with some friends just a week after their soft opening, and despite having observed the building work in progress, we were unprepared for quite how impressive a space they have created. This is an ultra-chic indoor-outdoor space with a cool, bright wood and metal interior, high ceilings and a long, spacious bar. The stylish parquet panelling contrasts nicely with the shiny tanks in the back of the taproom, which is spacious without being cavernous. The sliding glass opens the whole building up beautifully, creating a cool, laid-back vibe that’s already getting people hooked – it was happily busy during our visit. Although Hop Squad only have four beers pouring at present, there are a mighty 20 taps at the bar so they are obviously thinking big. 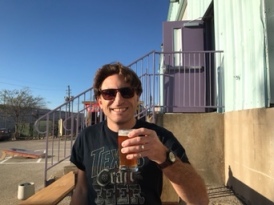 While beers so far are clean, simple and a little on the bitter side, they will appeal to those wanting to escape the more complex multi-flavoured maelstrom of some of our ATX breweries. The Lord Zanate IPA was my top choice – I enjoyed the sharp, herbaceous bitter hops. The Apprentice Pleasant Session IPA is a lighter, more fruity offering, and the Dutchess of Oltorf Roggenbier is quite earthy and gritty. The Comtesse De Duval Saison, which we had tried at last year’s Texas Craft Brewer’s Festival, has a dry, citrusy finish to it, and while none were outstanding they all went down easily on a crisp sunny Sunday afternoon. Although flights are currently being served only at the bar, our friendly server assured me that they would be available throughout the taproom in the near future. Of course, this just gave me an excuse to try four half-pours, so I’m not complaining.

Hop Squad has a very handy location close to the Metro Red Line, and in the same complex as lovely Circle Brewing, so you can hop on the train by Zilker or Black Star and whiz up there is a flash. I’m a big fan of the red route brewery hop, and it’s great to have a new addition to the line-up, especially one as aesthetically pleasing as Hop Squad. I’m sure we’ll be back soon to keep up with their next batch of brews! 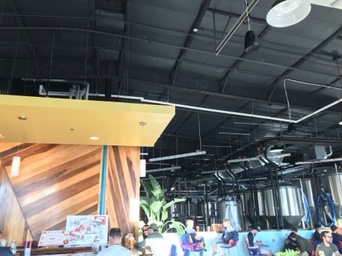 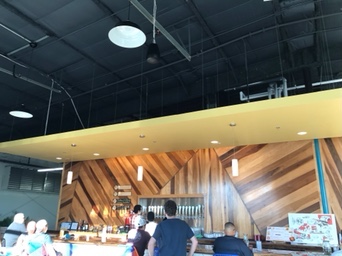