I’m a huge fan of Buffalo’s output and they’ve been my favourite Houston brewery for some time, so when I saw they were having a party with 25 beers on tap including some rarities, I couldn’t possibly resist. We were fortunate enough to find an excellent enough AirBnB around the corner which simplified matters significantly.

Their current site is located in a quiet residential area and taproom hours are limited to short periods on Friday and Saturday, but we got the inside scoop that they will be opening a snazzy new facility with all the bells and whistles on a larger site early in 2019. In the meantime, it would be a lie if I said I don’t envy the residents of Rice Village. 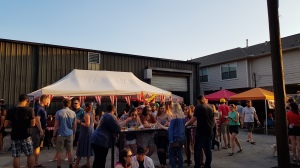 The carnival itself had a proper block party feel. Most of the street was cordoned off with an obligatory if benign policy presence. I was a little bit self conscious that my outfit had gone a bit far in embracing the carnival theme, as most of the locals were playing it cool in shorts and T-shirts. But I was consoled by the Buffalo folks, who had gone all out with full-on funfair garb, balloon animals and neon cotton candy, which I’d probably still be scrubbing out of my teeth if I’d have had any.

The beer selection was phenomenal, with an outside bar offering timed releases and a larger inside bar with over 15 varieties available at one time and an all-in ticket of a mere $15. We were very, very happy campers.

On the juicy side, the Crush City, Fruit Crushtail and glorious Tropikal IPAs kept us pepped up in citrusy brilliance, showing that Buffalo Bayou aren’t just a dark beer brewery. Indeed, these are among my favourite HTX IPAs. Nevertheless, there was no throwing the heavy hitters in the shade. I was supremely excited to get a taste of the absolutely immense (and hard to get hold of) 2016 Lenin’s Revenge Russian Imperial Stout, and it was every big bad thing I hoped it would be. Buffalo Bayou’s Cowbell beers are something I just can’t get enough of either, and oh yes, there they all were, from the deep, intense Big Black Cowbell American Imperial Stout (2018 and 2016!) to the smooth, sophisticated Comrade Cowbell Barleywine to the More Cowbell DIPA with its heavenly intense hops. And just in case you’re not jealous enough already, we were treated to their awesome Gingerbread, Thin Mint, Red Velvet, Coconut Crush and Vanilla Mocha Sunset Stouts. Guess I’ll be seeing y’all at the next one, right?!

The crowd stayed on the friendly side of too cool for school and there were fun 90s tunes spinning to have a good boogie to. Friendly and enthusiastic volunteers were if anything overly generous with their pours – there were a lot of beers to get through, but it’s a difficult conundrum because all the beers taste so good! We managed to try 21 beers over the course of the evening, which was for me kid-in-a-sweetshop great, but because I basically love all of it it was almost a shame to rush through them. I just want these guys to set up a satellite branch in Austin so that I can have them all whenever I like!

Buffalo Bayou are masters of exciting, creative complex beers, particularly their outstanding range of stouts, porters, and quads, and this was a super fun opportunity to explore both past and current oeuvre. There an essential part of the HTX beer seen and I’d love to see them more widely distributed, especially in the UK. Can’t wait for the next visit!