Budapest may be the new go-to for North European stag parties who have transformed the formerly quirky, studenty Jewish Quarter into a mix of gaudy neon and pseudo-hipster, but craft beer is big, and no amount of Jaeger shots are going to silence it.

Budapest, like many civilised European cities, allows one to drink on the street, in the open, without either feeling or being treated like a weirdo or a criminal. This is a huge advantage, especially somewhere with such deliciously warm summers and nice big outdoor spaces, and it means that craft beer to-go is a big hit. Walking around beer-in-hand is totally cool and you can take beers out of most venues. 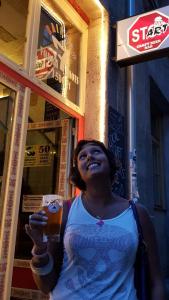 While we went to some really fab bars with great décor and a fun vibe, one of my favourite drinking experiences was hitting up the tiny but knowledgeable and extremely well-stocked STart bar for a draft half to sip on the sidewalk (sorry, pavement) and then a bottle or two for the road. Despite its name, STart was happily unpretentious, and despite having the menu in multiple languages, the barman displayed none of the expected weariness when answering stylistic questions in English, being friendly, helpful and remembering us on our return visits, what a way to feel welcome in a new city! He also recommended some absolute bangers, including Legenda Sorfozde’s Brettannia Brut, a super-bretted sour, and a nice sticky Hopfanatic Nohoplimit DIPA (yes these are real beer and brewery names!). This is an excellent place to begin your Budapest craft beer adventures, get familiar with local brands and its super-central location means that you’re only a few minutes from several other must-visits, including Hops beer bar and the Mad Scientist beer bar in Szimpla ruin pub.

Hops beer bar is a nice little place with a full-on bar mat wall and a small upstairs gallery. It doesn’t have any outdoor space and get pretty hot inside in the Budapest summer, but you can take your beer outside if you don’t mind the traffic and passers-by. They have a wide selection of Hungarian and European craft beers, including a lot of Brewdog, Mikkeller and Delerium, should you feel like a change from the local. However, if it’s Hungarian craft beers you want to learn about, their selection can feel a little limiting after a couple of visits, and although staff are friendly they aren’t as well-informed as in some of the other venues, nevertheless it is definitely worth a visit.

Szimpla is absolutely crazy – if you love nutty, eclectic décor, theme rooms and knick-knacks, somewhere between a Punchdrunk theatre show and an underground bar in Hackney, Szimpla will totally do it for you. While there are plenty of alcohol options on-site, it’s worth finding your way to the rather fabulous Mad Scientist brewery bar on the first floor, with a craft beer periodic table, giant lab equipment and neon lighting to make the experience extra-trippy. If you haven’t already gotten your beery mitts on the legendary Liquid Cocaine DIPA, this is your perfect opportunity, but if you fancy something a little less ambitious, they have a solid range of styles which can be enjoyed from chemistry equipment for a small fee. 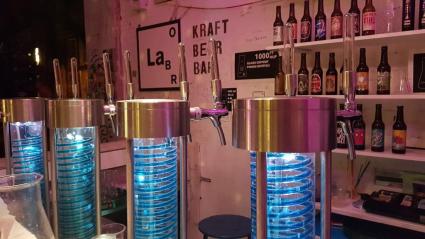 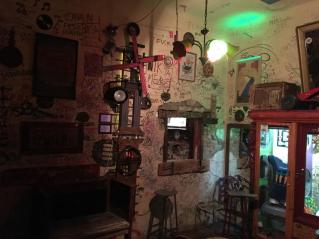 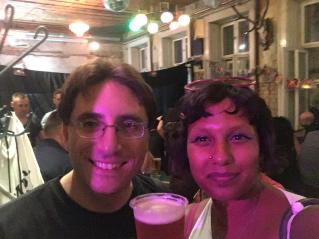 Eleszto was, for me, a bit of a disappointment, but this was more to do with the atmosphere and décor than the beer list, which was impressive in its focus on the local and breadth of styles available. However, we arrived quite late on a rainy night and it was pretty empty, which was pretty unexpected in a European capital city during high season. The only explanation we could come up with was that most people had already moved on to clubs by this time, but the limp atmosphere and rather officious bartender (the kind that automatically assumed that as a female, I would know nothing about beer) contributed to a rather damp squib of a visit, compounded with the rather plain interior that certainly didn’t evoke any sense of it being a ruin pub at all compared to Szimpla. Nonetheless, we enjoyed a very tasty Horizont Rush For More IIPA, a brewery I would strongly recommend looking out for on your visit, as they were routinely memorable, particularly their very hangover-friendly lager – a must for Budapest drinking! 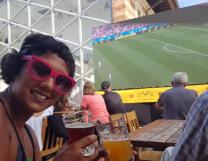 The Jonas Craft Beer House, which occupies a scenic if slightly corporate spot in a brand new shopping centre next to the river, was actually a pleasant surprise. Having read online that it was a little soulless, we found it to be lively and friendly, although the World Cup being shown on a massive outdoor screen may have contributed towards this. Linked to Reketye brewery but serving a good mix of local brews, this is a great place to chill out on a hot day and watch the world (or the World Cup) go by. We loved the Pineapple Candy Flip from Brew Your Mind, a juicy beery smoothie!

This is a small outdoor outpost of First, just next to Jonas Craft Beer House on the riverfront. The only had a couple of beers on tap when we visited, and we grabbed a pint of their IPA which was a decently hoppy session beer. Not worth a special effort to visit, but if you’re in the area it’s somewhere different to try. 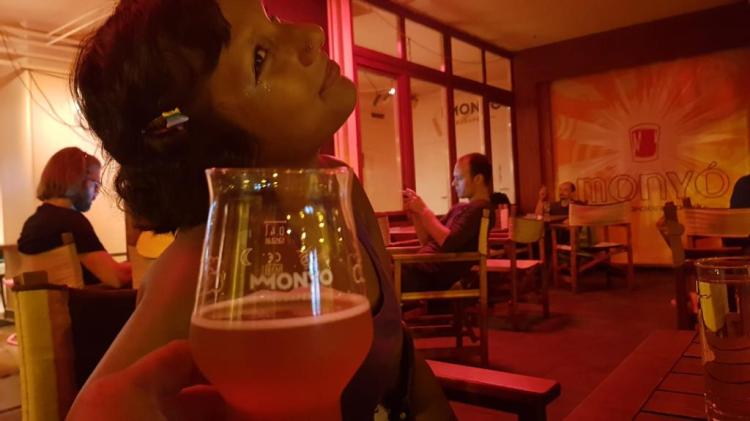 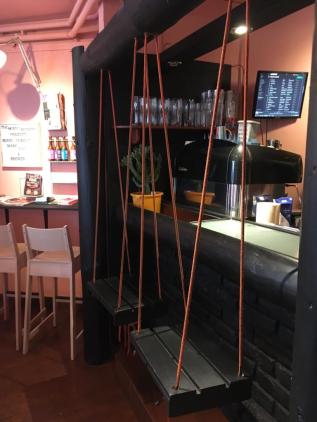 The Monyo Taproom is amazing. They have swings at the bar. Actual swings that you can swing on as you order your beer. They also have some seriously awesome beers. All of the six that I had were of an exceptional standard, from the bright, refreshing Afterparty Saison to the outstanding Nutty Moose Barleywine, which was as smooth and aromatic as a Tawny Port – this is the stuff that beer-dreams are made of! I couldn’t resist trying the Belgian Trip Tripel, Black Mamba Imperial Milk Stout and Dead Rabbit DIPA as well, which was rather ambitious at about 6pm but absolutely had to be done. That swing was even more fun afterwards! If I could have brought Monyo home with me I would have, miss this at your peril.

Puder sells itself as a ‘ruin bar’ and, wanting to experience as many of said ruin bars as possible, we undertook a rather ambitious trek across the city quite late at night. On arrival we were a little disappointed as it’s basically a regular bar in an old building. The décor, while interesting enough, isn’t remotely on the Szimpla scale, just what you’d find in a regular hip bar. The beer selection was also disappointing, with very little local fare – I ended up settling for a Mort Subite Kriek Lambic, which isn’t really what you go to Budapest for. We had a nice enough time, but this isn’t as advertised.

This is cool underground hipster spot with a pleasing range of local beers and a most accommodating bartender who listened to my requirements, brought out a selection of bottles, talked me through them and helped me choose. Top marks, Horizont!

Of the three beers I tried there, the best was Hara’Punk’s Punk Juice IPA (no relation to Brewdog) which was respectably hoppy, and while I was less impressed with my other choices the SpaceNext Rocket and Hopfanatic T-10s) they were average as opposed to awful and I probably should have chosen better. Horizont has outdoor seating if you’re not a fan of dark basements, very fancy beer glasses which I loved, and apparently, No Aperol Spritz – tee hee hee! 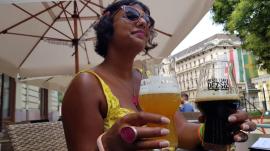 This brewery and gastropub is a sleek, modern establishment in the centre of Budapest’s Jewish Quarter. We’d been meaning to visit throughout our stay but kept getting distracted and didn’t get there until just before we had to leave. We rolled up with our suitcases and sat at their smart outdoor tables with just enough time to sink a couple of halves – so little time, in fact, that we neglected to order any of their three beers brewed in-house, thus rendering me unable to comment on them (clearly having taken our eye off the proverbial ball – a hangover may have been involved). Their guest tap list is impressive, and we were distracted by a lovely sweet juicy Horizont Pilot Series #10 NEIPA and a malty, bitter Golem Sotet Bunko Black IPA. At midday on a Sunday it wasn’t the most buzzing of places, but this is undoubtedly a limited perspective. It does have a very restauranty feel to it, with crisp linens and table service. A fancy contrast to most of the Budapest craft beer scene!

A hole-in-the-wall bottle shop that does exactly what it says. They have a small but carefully formed selection of local brews and the chap who served me knew his beery onions. In a city where you can drink on the street, this was a good find. 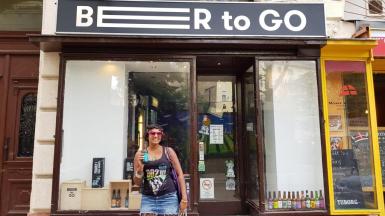