A veritable tidal wave of exciting new micro-breweries have been popping up in and around Houston over the last few years, to the extent that the craft beer scene is almost unrecognisable from my first visit in 2014. North-east of Downtown, The Heights, Montrose and Rice Village are not only Houston’s most hipster neighbourhoods but are now home to a swathe of cool new breweries that fit in perfectly with their bohemian aesthetic. 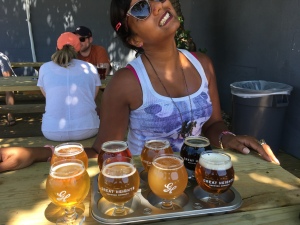 We visited Great Heights the day after Wild West Brewfest, so you’d be forgiven for thinking I may have been below full beer-drinking form, but the menu was so tempting (including 3 IPAs and a DIPA!) that I went for a full flight of all 8 beers on offer and was not disappointed. The Citramendous DIPA was gloriously dank with bold, savoury hops, and the Denali IPA was juicy and full-bodied. The Porter, the only dark beer on the menu at that time, was nicely smooth and creamy and the Lager-ish Kolsch was so refreshing that it was gone in seconds. Eight beers? What eight beers?!

Great Heights have a lovely new taproom tucked into a cool leafy residential neighbourhood, with stylish artwork and a pretty patio shaded with trellising. Locals must have been overjoyed when Great Heights opened their doors and they could just trundle to the end of the street for some top quality bevvies. 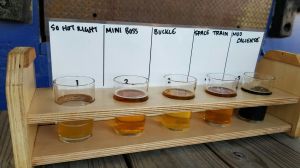 Nearby Eureka Heights is a more established operation in a large warehouse space, dog-friendly with plenty of board games and a few picnic tables outside. Their award-winning Buckle Bunny Cream Ale went down a treat and I basically inhaled the So Hot Right Now IPA it was so moreish. The Moo Caliente was a perfect mix of smoke and spice, and the double-dry-hopped Mini Boss IPA was tropical-tastic! Staff were kind enough to replace a beer that was accidentally spilled on its way to the table, ensuring that I got the full flight experience, even though they were closing up, which was very much appreciated. They also have the super-cutest branding and I am now the proud owner of a fabulous aquamarine tank top sporting a gorgeous pink bunny. 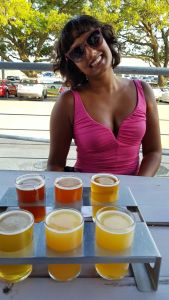 Holler also seems to be a very established part of the Houston craft beer scene, located on the edge of The Heights and looking out over Downtown Houston. Arriving on a Friday night, the place was heaving with everyone and their dog (literally) queuing at the bar. It was a decent, varied flight with my favourite being a sweet viscous Belgian Tripel. The two IPAs couldn’t have been more different, with the Hit Me Hazy One More Time NEIPA going haze-to-the max (you could stand a spoon up in it!) contrasting sharply with the tart, bitter grapefruit of the Holler IPA. I have to give them extra points for naming their English Pale Ale Margaret Thatcher Naked On A Cold Day. Yep, in Houston. Really.

We also loved the super-cool hop-shaped lamps that I want for my house, and I’m now seeing in an increasing number of breweries, although this was the first, and the great view of the Houston skyline from the patio was an absolute winner – what a place to watch the sunset! 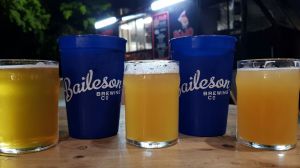 Tucked into a quiet South Rice Village street, Baileson Brewing is another new kid on the Houston block, opening their doors in September 2017. We visited on a Friday night, close to closing time, and there was a relaxed, jolly vibe with folks and their dogs in a weekend mood. The taproom pretty much opens out onto the pavement, giving it a sort of mini-block-party feel that I rather enjoyed. Our flight of five included three IPAs, all of which were rather good and suitably contrasting, from the tangy citrus Masinghorn to the full NEIPA Modern Mo’tralaxy. The super-coffeed Structural Stout was also a hit, and definitely a good call for a night out! There was a food truck with Asian dishes, not the cheapest but it was pretty tasty. Both staff and patrons were ever so friendly and we’d have hung out longer but for the lateness of the hour. Definitely a brewery I’ll be back at on my next HTX visit.

Under the Radar Brewery 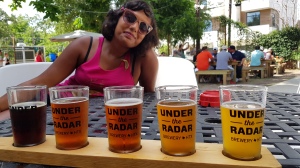 Under the Radar Brewery taproom is in happily close proximity to Houston’s Museum District in Montrose, and after a full morning’s sightseeing we were more than ready for some beery libations. At eight years old, Under the Radar is well-established compared to the many new breweries popping up, and has a lovely large leafy beer garden. All seating is outdoors, with picnic benches and tables under trees prettily decorated with bunting and fairy lights. If you’re there on a day as hot and sunny as that of our visit, you will be very, very grateful for those trees.

The slightly odd thing about the Under the Radar taproom is that, despite them having a substantial oeuvre of beers, they sell only their widely available core range and just two rotating seasonals. While I understand the appeal of a local where you know what you’re getting, I found it puzzling that, unlike most breweries, particularly in Austin, they’re not using their taproom as a sounding board for new brews and offering exclusives to attract new visitors. Our flight of their five flagship beers was absolutely fine, but we were a touch disappointed not to be offered more choice. That said, this is an excellent spot to whet your whistle when you’re done museuming.

To read about Buffalo Bayou, see my entry on their Spring Carnival. 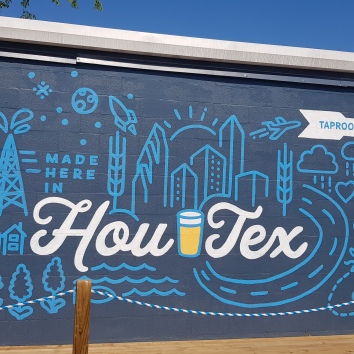 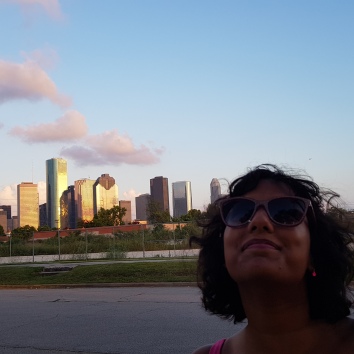