Skull Mechanix opened in February, and with it being in a super-local spot for us, just down the road from St Elmo, we were keen to visit soon after our return to ATX in the Spring. The Skull Mechanix taproom is an ambitiously large chrome-glass modern space in a warehouse lot tucked off South Congress, and is open seven days a week, hours day-dependent. Air conditioning is high but there is outdoor seating for those who are jumperless. On our initial visit we thought it best to try out all seven beers available, as you do, and loved the cute skull taster glasses. In fact, their branding overall is a huge draw for someone like me who loves skulls on everything. It’s only a matter of time before I’m sporting a tank top. 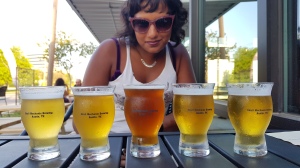 Our flight ran a wide gamut of styles, covering bases ranging from Pilsner to IPA to Saison, ESB and Stout, quite the full house, with an interesting emphasis on European styles (Czech Pilsner, Irish Stout, English Pale and IPA). Overall, quality was high, which was impressive considering this is a young brewery tackling a diffusion of styles, but having further investigated Skull Mechanix’ provenance, it’s owner is chock full of craft beer expertise from around the US, so high standards are to be expected. I particularly enjoyed the Best Bitter, a lovely caramel malt, and Classique Saison which was nicely full-bodied and chewy. We put the lack of a crowd down to visiting midweek, but on our return on a Friday evening with great live music on, were disappointed to find it equally empty. This may have had something to do with the Austin City Limits festival being on, but we couldn’t help but notice that nearby St Elmo (see separate entry) was still packed to the gills. The SoCo crowd clearly aren’t the easiest to woo away from an established local, which is a shame as Skull Mechanix has a lot to offer. C’mon South Austinites – mix it up a little! 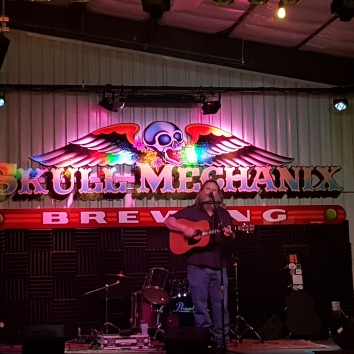