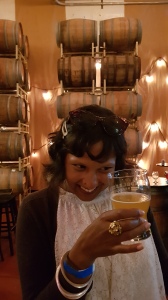 We stumbled upon Adelbert’s 19th birthday party by accident while trekking (metaphorically) around the North Austin brewery circuit of a Friday night. Our previous visit to Adelbert’s was a lot of fun and significantly exceeded my expectations. As one of the city’s older craft breweries, I thought it might be a little fusty and traditional (see also, Celis) but the Adelbert’s taproom is definitely where the party is at. With live music at the weekends, a fun, slightly older crowd, and an exciting, innovative and extremely tasty beer menu focusing on variants of Belgian styles, this is a must-visit Austin brewery even if they don’t have a party on. For their 19th, which wasn’t widely advertised, we paid $15 for six half-pint pours, all of which were more than generous. Their beers range from the super-sour When Life Gives You Lemons to the big, rich, sweet Tripel B, with a whole array of tasty delights in between. Our excellent server (Justin) even did a special mix for us, known as the Punch, combining their Hibiscus Saison and Mango Wit, which was absolutely crackin’. The 2017 Vintage Nun was also pretty spectacular, although I’d never have guessed it was a Witbier, it’s big enough to pass as a barrel-aged quad and I look forward to this year’s incarnation!

The taproom itself is a cosy wooden space with local art on display and upturned barrels for tables. On both our visits the live music has been excellent, whether singer-songwriter or fun popular covers for the party (requests were made and taken in good humour – always a win). The crowd is relaxed enough that you can let your hair down and have a little dance, and believe me, you’ll want to – this has to be one of the brewery taprooms that has put me in the highest spirits. It retains an old-school Austin friendliness while offering up beers that can hold their own against any of the new kids on the block. Adelbert’s may not be top of the Austin craft beer hipster agenda, but flying under the radar just makes them that little bit cooler in my opinion. Can’t wait to go back soon! 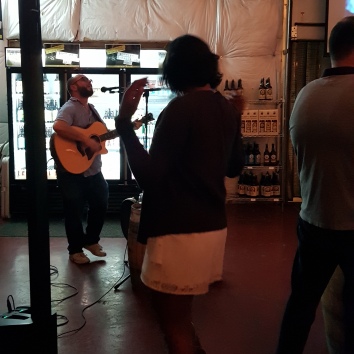