As increasing numbers of cash-strapped Austinites are moving out to Round Rock, it’s only natural that the beer scene there needs to keep up. Bluebonnet, a lovely, low-key family operation, is pretty much the epitome of drinking local, in a garage nestled between housing estates (yes, we got a little lost en route!) Bluebonnet was doing a roaring trade despite (or because) they are only open for three hours each week (5-8pm, Saturdays). They have a tasty, and extensive beer list, complemented by outstanding barbecue from Bohemian BBQ food truck (worth the journey all by itself).

Bluebonnet is the gold standard low-budget indie of the ATX beer scene, long-established in the community, no plans for world domination, just great beer and friendly service should you turn up at the appointed hours. Although this a properly local spot, we were made very welcome and had a nice chat with owners David and Clare. As well as coving the basic styles, Bluebonnet aren’t afraid to push the boat out, and have a barley wine, Belgian strong ale, cream ale and ESB on offer. All the beers I tried were of a uniformly high quality, with the cream ale happily melting in the mouth, the Texas Pecan Brown satisfyingly smooth and nutty and the rich, highly potent barley wine thick, sweet and slightly glutinous, like a good dessert wine.

Bluebonnet is the kind of brewery you always hope to stumble across and feel so pleased with yourself when you do, so if you do make it over to Round Rock during those magic hours, make sure you drop in. 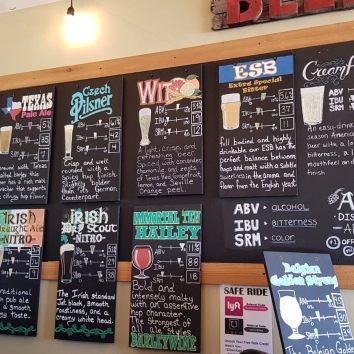