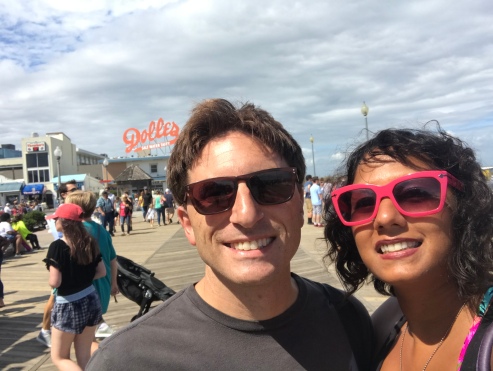 I’ve been hearing stories about the magical Rehoboth Beach almost for as long as I’ve known JB, so my very first visit was obviously a source of great excitement, and I was not disappointed. The clean white sands, crashing waves and classic all-American boardwalk straight out of Jaws were everything I had believed they would be. Of course, when JB visited as a child, beer was not yet high on his list of concerns but I was pleased to discover that the area has a young, burgeoning craft beer scene with none other than the mighty Dogfish Head at the helm. 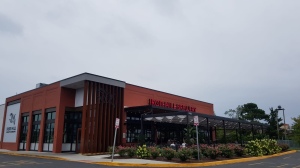 A trip to the tax-free outlet mall just north of Rehoboth was, I was told, one of the highlights of any family holiday, so I trotted along into the mele of excitable children and exhausted parents, and somehow ended up with a pair of trainers. Nonetheless I had immediately clocked Iron Hill Brewery across the street – the perfect location for a post-shopping brew or two. The Iron Hill chain originates in nearby Newark, DE and has 18 branches across Delaware, Pennsylvania, and New Jersey and even a couple inland in Atlanta GE and Greenville SC. All beers are brewed on-site and there’s a full restaurant menu – on the pricey side but well-suited to solving the immediate needs of shopping fatigue! 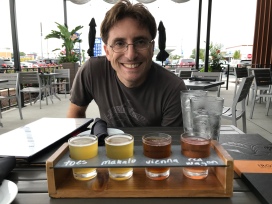 The beers at Iron Hill were traditional and well-executed – my favourite was the Hipster IPA – chock-full of melon and mango, and I also enjoyed the richer, more boozy Grave Digger DIPA and nicely caramel-malted Vienna Red Lager. The Mahalo, Apollo! Wheat was also a nice surprise – lemongrass in beer can be a bit hit and miss, but this turned out most drinkable. Definitely a suitable spot to refuel if you’ve exhausted the outlets, but not the most atmospheric, being right on the highway. https://www.ironhillbrewery.com/ 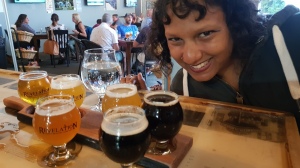 Very close to Iron Hill, we found Revelation Brewing, just off the area’s popular Junction and Breakwater bike trail. The skies had just opened and we bundled into their cosy, wood-panelled taproom to be greeted by an impressive beer list, so much so that extras to our flight had to be ordered. The Downtown Donut Brown was a winner, with a subtle donut flavour that complemented the rich Brown Ale underneath and came out deliciously smooth on nitro. I also loved the Cascadian Shepherd Black IPA – beautifully full malty liquorice hops. I do love a good Black IPA and there really aren’t enough of them around. It was also an unexpected pleasure to find a beer on cask and this experimental version of their flagship Conan The Juiceman with Hallertau Blanc hops came out nicely floral and fragrant. The 15 Reasons NEIPA was another success, keeping the juice and hops very well-balanced. This was a lovely, friendly taproom and we wanted to stay longer and try more of their excellent beers. They also serve pizzas that looked very tempting – highly recommended. https://www.revbeer.com/ 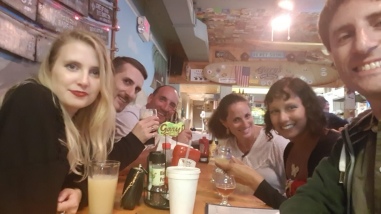 Later that evening we visited 38-75 Brewing, very close to Dewey Beach. During our visit, they had only one beer of their own available (the 7 Seas Pale, which tbh was not very good at all – none of our group could drink it). Nonetheless, they have a solid and substantial tap list of other local beers, and we enjoyed brews from the likes of Manor Hill, Monument, 3 Stars, Mispillion River, Union and Oliver Brewing. It’s also open til 1am so a good late night spot! https://www.3875brewing.com/ 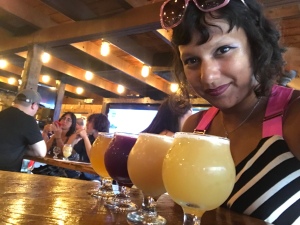 The following day we visited Dewey Beer Company for drinks and dinner. This highly-rated brewpub in the centre of the Dewey Beach strip had been full to the gills every time we’d walked past it and was equalled bustling during our Saturday evening visit. NEIPAs are very much the thing here, with most of the IPAs coming out very sweet, full-bodied and juicy. While this is not, in itself, a bad thing it isn’t what you expect when ordering a flight of self-described APAs and DIPAs, and at the other end of the spectrum there was some excess bitterness on those that were less sweet, particularly the Seven Percenter. That said, there were some really tasty beers here. The Raspberry Lemonade Sour and Blueberry, Blackberry & Raspberry Sours were both bright, tart and juicy with vibrant colours and chewy textures, and the No Shower Happy Hour was by far the best of their IPAs and nicely balanced. The food menu was very pricey for a brewpub, and a little disappointing for what we paid, ($26 for a bowl of noodles with a few pieces of octopus thrown in!) although it was tasty overall. Go expecting all the juice! https://www.deweybeerco.com/ 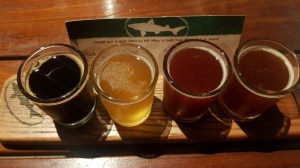 Of course, a visit to the Dogfish Head Alehouse on Rehoboth Beach was an essential and we were somewhat over-excited on arrival (see also Dogfish Head Milton!). While the interior is your fairly standard brewpub (and ended up being my least favourite of the three sites we visited), the beer list was extensive and included a strong selection of high-end rarities – always my favourites. My top picks (of many) were the BBA Palo Santo Marron – smoky bourbon-wood heaven in a glass, and the magnificent Fruit-Full Fort which falls into some very happy place between a Port and a beer. The Raison d’Extra, Covered in Nuggs, World Wide Stout and Wood-Aged Bitches Brew were all great too, as you would expect one of the top major brewers of experimental beers to offer in their alehouse, and a very good time was had by all. Having a taproom right by the beach with live music that’s open til 1am is a very smart move from DH and if we’d been less busy we’d probably have been there every night! https://www.dogfish.com/restaurants/brewpub 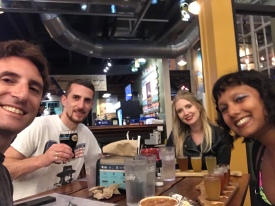 Nursing our post-Dogfish hangovers the following day, we ventured out to Lewes for dinner at Crooked Hammock Brewery. This is a very family-friendly spot, brightly coloured (almost too much so for our bleary eyes!) with outdoor games and table service. While service was excellent, both the food and the beer were pretty average, the strongest beers being the light, crisp Actively Fishing Pilsner and bright, fruity On Wednesdays and Caught In The Rain Sours. Our crab cakes arrived unadorned with oven chips and a small serving of coleslaw, not really worth $20, and we soon moved on to the Big Oyster taproom just up the road. https://crookedhammockbrewery.com/

Arriving just before close, we quickly realised that we should in fact have started at Big Oyster – their substantial, exciting beer list had me jumping in with two flights at last call because I didn’t want to miss anything, hangover be damned! Fortunately I was not disappointed, and we were allowed to consume our beers in peace rather than being hustled out, for which they get extra points. With their list divided into IPAs and experimental farmhouse styles, with a couple of dark beers in the middle, I went for a good mix of everything and found Big Oyster to be equally and impressively proficient across the board. 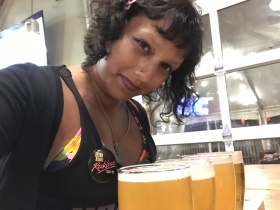 I loved the Drowning In Blackberries Farmhouse Saison, which went full-on with the fruit but retained a rustic, restrained tartness which made it very moreish. The Down Under Mate IPA, dry-hopped with NZ Wakatu and Wai-Iti hops had a beautiful dry, champagne-like finish to it, and their flagship Hammerhead IPA was a 6-hop West Coast delight that would doubtless be my go-to if I lived there. The Honey Bunny Imperial Saison was also lovely – a mix of wheat, barley and rye along with orange blossom honey created a complex, dry tangy sweetness with a long finish. Despite not being a fan of tea in beer, I liked their Noir et Bleu, brewed with blueberries to lift the bitterness of the tea, and the Big Oyster Stout brewed with local oyster shells had a winning mineral finish to it. Don’t leave this one til the last minute, folks – get down there early and drink all the beer! http://www.bigoysterbrewery.com/ 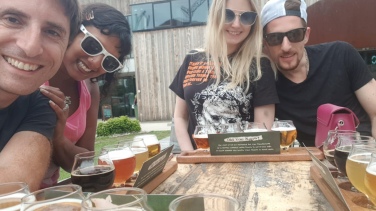 We had to go out with a bang, and where better to do so than the mighty Dogfish Head Brewery Taproom, located just north and inland of the beach in Milton, DE. Once again, we were rather squeally with excitement, after the obligatory jumping up and down, enjoyed the fun, free brewery tour which gave us a nice potted history of Dogfish Head as well as a chance to glimpse where the magic happens. Our volunteer tour guide was enthusiastic and informed, and we were delighted to find that free flights were included with the tour – bonus! 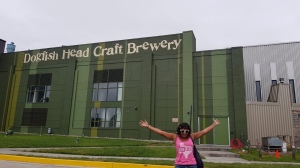 Of the four experimental taproom specials available, my top pick was the Kelp! I Need Some Honey Farmhouse Saison brewed with kelp and local honey, a collab with Oxbow Brewing, which was beautifully smoky on the tongue-hopefully it will receive a wider release. The Palo Santo Marron, an oaked dream of an Imperial Brown aged on Paraguayan wood, was so damn good we had to bring a crowler of it back! The Favourite Influencer Sour IPA was also very tasty, and I even indulged in a flight of cocktails made with DH spirits, which I would highly recommend. The facility is huge, with the taproom itself small in comparison, a low-ceiling, industrial space with 19 beers on tap, although the beer garden is much more spacious. We had a lovely afternoon sitting by the Steampunk Tree quaffing DH brews straight from the source – there’s also food and outdoor games to keep you busy – enjoy! https://www.dogfish.com/brewery/tasting-room/tours 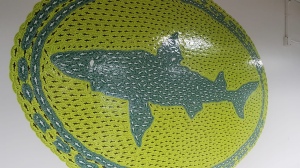 Overall the beer scene in the Rehoboth area is pretty good for a beach resort. We discovered on our Dogfish Head tour that it had been illegal to brew beer in Delaware since Prohibition until founder Sam Calagione pushed through a bill to change the law before opening his first taproom in 1995, which is a pretty spectacular achievement, and one that all the other breweries we visited have certainly benefitted from. If you’re in a hurry, my must-visits would be Revelation, Big Oyster and the two DH sites, there’s plenty here to keep us beerfolks entertained for a week too! Also, if you’re looking for beers to drink at home or on the beach don’t miss Outlet Liquors – they sell all their fantastic beer selection as singles, have excellent mix-packs and do growler refills, and it’s super-cheap and tax free! Happy drinking! 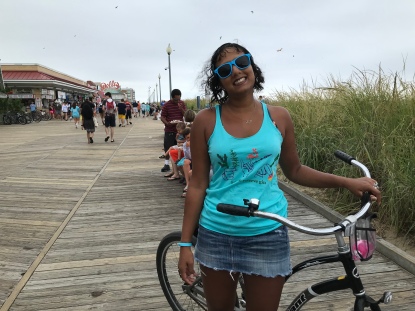 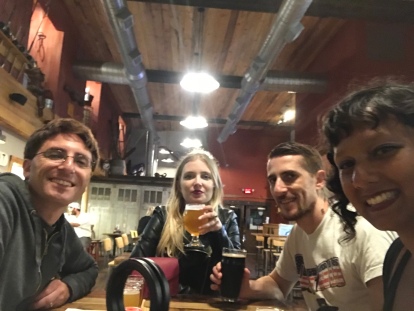 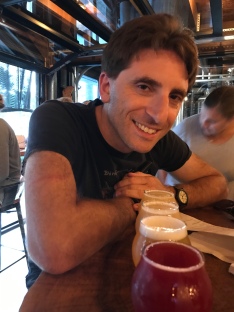 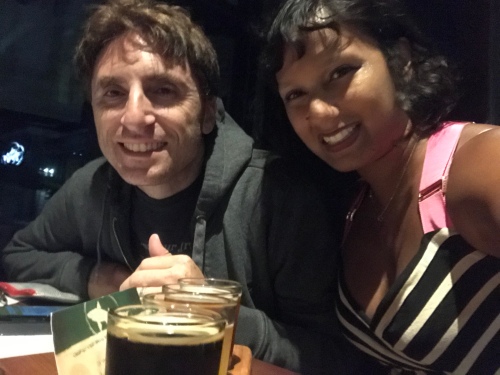 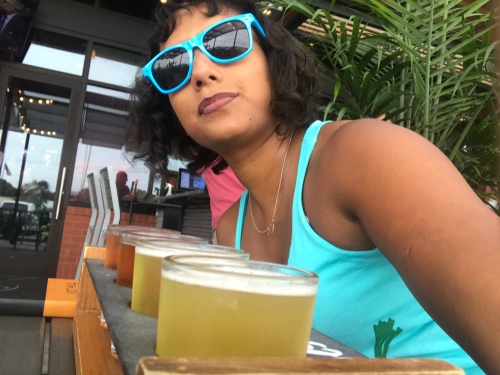 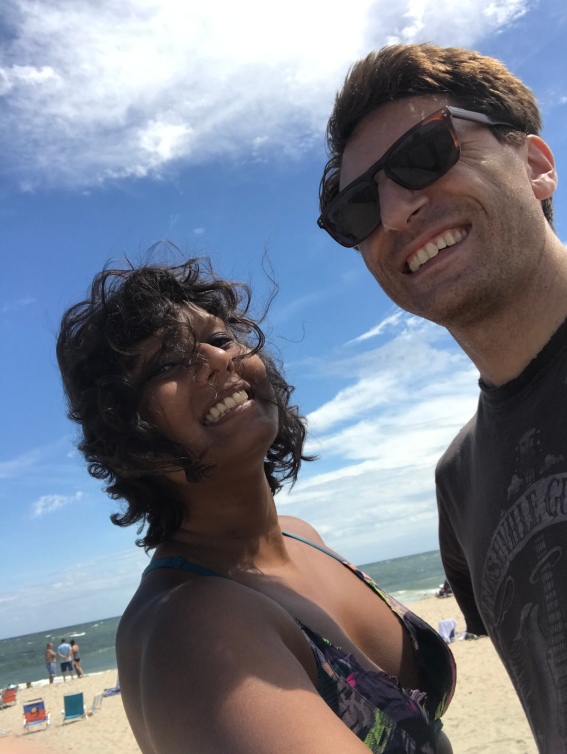 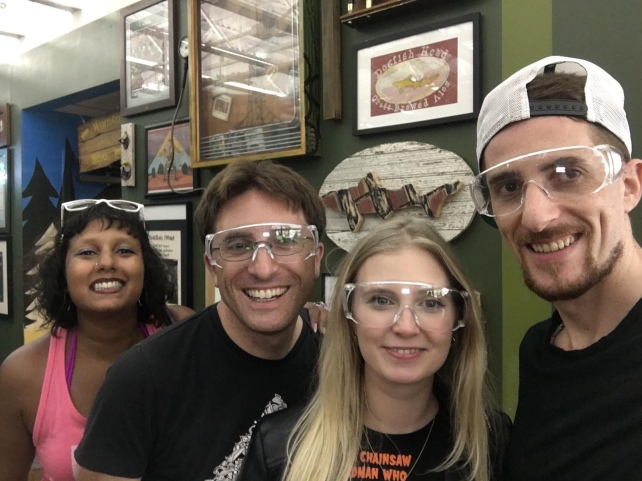 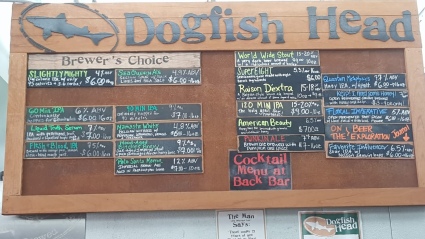 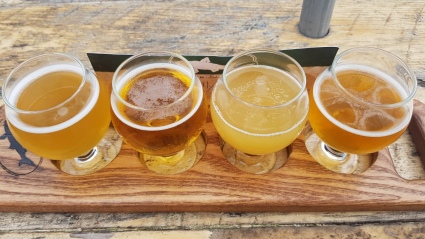 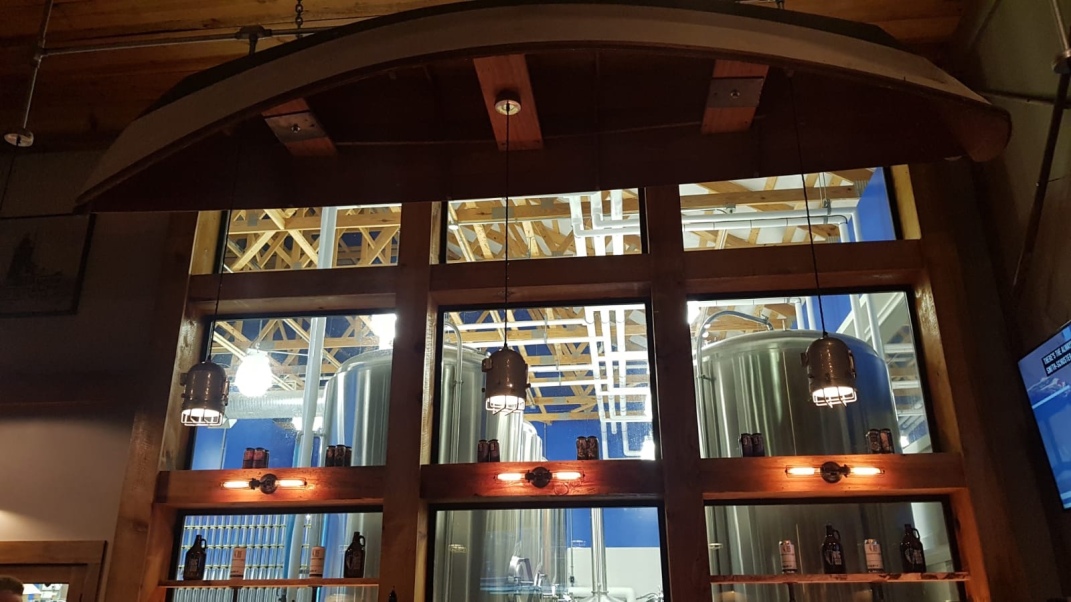