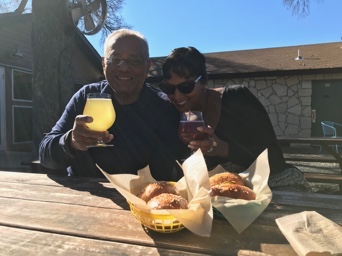 We’ve been regulars at Batch’s lovely kolache and craft beer emporium since arriving in ATX and were super-psyched when they announced their expansion into brewing. Although we sadly missed their grand brewery opening in November, we’ve been able to stop by twice since and have been most impressed with the range and quality of beers they are producing, not that we’re surprised – after all, they do bake the best kolaches in town!

We first visited just before Christmas, keen to show off the local delicacy that is the kolache to my father who was freshly arrived from London. It was a perfect Texas December day so we were able to take our delectably moreish baked goods and tasty brews out to their cute sunny beer garden and introduce my father to the grackles as we ate and drank. Despite being open for barely six week, Batch already had a not-insubstantial 11 of their own beers on tap which left us somewhat spoiled for choice. Although they are not at present serving flights or half-pours, you can sample the beers before committing, which was most necessary with so much choice on offer. Like their fabulous neighbours, Oddwood Ales, Batch are positioning themselves as IPA and spontaneous-ferment-forward, and have already started a very exciting farmhouse yeast and wine-grape series Galaxies Collide. On our first visit, I had the Sirius B – a complex and sophisticated blend of Gewurztraminer grapes and lemongrass which went down an absolute treat. My father, who won’t normally touch a fruit beer, was enticed into trying the DDH Pineapple Table Beer which he really enjoyed – the fresh, dry pineapple without a hint of sugar or lactose was really bright and easy-drinking.

Having made such a good impression, we took another UK visitor, Tim Holt of the Brewer’s History Journal, to Batch this week and again were treated to some really excellent brews. Their Oddwood collab, the Life Day Black IPA, is a magnificent beer full of dark, velvety hoppy goodness – not that I would expect anything less from these two breweries coming together. I also loved the latest Galaxies Collide offering, Galileo’s Fandango – a beguiling combination of Lambrusco and lavender with added yeasty funk– it doesn’t sound like it should work but it really, really does. Having cornered the market in high-end kolaches (do not miss the Micklethwait barbecue brisket or the sausage-cheese-jalapeno), Batch are brewing up a fruity, funky storm. We don’t actually need another reason to visit Manor Road, but this corner of the city has just become even more enticing!