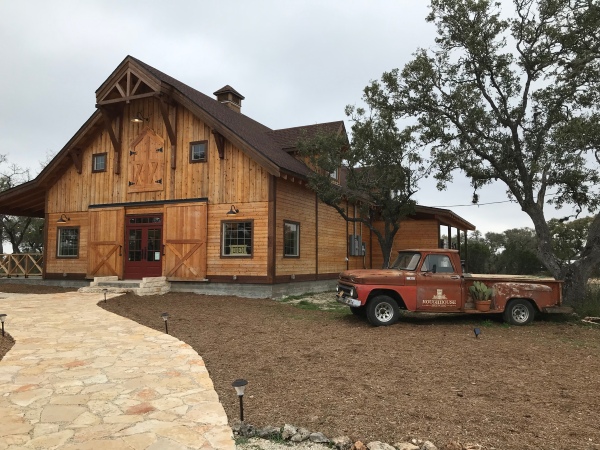 I had been hearing great things about Roughhouse, which opened last December, since arriving back in ATX in January. Naturally I was excited about a new local San Marcos farmhouse brewery in the gorgeous Hill Country, just minutes down the road from Middleton Brewing (and a relatively short drive from our new house-to-be, no less!) but hadn’t had the opportunity to visit. A chance meeting with Roughhouse’s co-owner and cellarman Andy Pasternak on a visit to Whichcraft Beer Store necessitated that we find a way to squeeze in a trip to the farm before leaving town, as not only was Andy inspiringly passionate and excited about Roughhouse and their beers, he was also armed with samples so tasty that JB and I found ourselves reorganising our weekend rather rapidly!

While we didn’t have the best weather for visiting Roughhouse (it’s been a peskily cold Texas winter!), no amount of gale and bluster could disguise the beauty of the Roughhouse farm. Driving through the pretty Wimberly scenery and closing in on the brewery down a windy country lane, my first glimpse of the gorgeous Roughhouse taproom put me in mind of Hansel and Gretel’s witch’s gingerbread house, but for adults – an irresistible, perfectly formed mirage suddenly stumbled upon and filled with temptation! There’s nothing scary about this cottage though (although there are cookies, as if they knew JB was coming!). The elegantly decorated interior exudes warmth and atmosphere, with the charm of a historic hunting lodge. So much care has been put into each element of the décor, from the lovely moss-green bar lamps to the wooden board games, that it was difficult not to gush praise profusely when I met Alex Pasternak, co-founder and head of sales and marketing at Roughhouse, whom I had an excellent chat with. 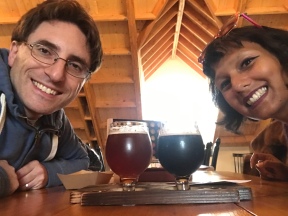 Roughhouse is the most family of family businesses – Alex is married to co-founder and head brewer Davy, brother of Andy, and the taproom is built on their family’s land. With just three of them running the business, they have achieved an immense amount very quickly, as well as the taproom, a short glance at their impressive distribution list speaks for itself. And that’s before we get started on the beers. Roughhouse is all about the farmhouse style and their aim to brew ‘yeast-forward’ beers with locally sourced ingredients is both ambitious and delicious, both of which I’d expect from the former head brewer at the sour-beer-heaven that is Blue Owl. Although Roughhouse only have four regular beers available (plus an additional three specials during our visit), the standard is so high that you can taste how much care and preparation has gone into them. The Treeform IPA, their original beer, is one of the best farmhouse IPAs I’ve ever had, bright, fragrant and perfectly formed. The Ona Amber Sour was also a treat, the tart dry cherries making it incredibly moreish, and I fell in love with the Sordid Nature, a Stout-Saison hybrid that’s so lush and sophisticated I found myself scheming for a way to get some back to UK beerfriends! The specials that we tried, brewed for Texas Independence Day, added local flavours of grapefruit, oak and pecan respectively to these bases and were successful variants, but with beers this good they really didn’t need anything else in the mix.

Roughhouse has a huge, rustic beer garden, not dissimilar to the one at Vista, with picnic tables and a stage with regular live music, and is dog and family-friendly. They offer beer snacks and sharing plates, and if you sit upstairs you can look down on the beers fermenting in their foeders (large barrels) made of American White Oak, which is a very pretty sight indeed. I am so excited to see what Roughhouse brew next and to get back to this glorious space when the warmer weather kicks in – I’m expecting it to be very busy there! 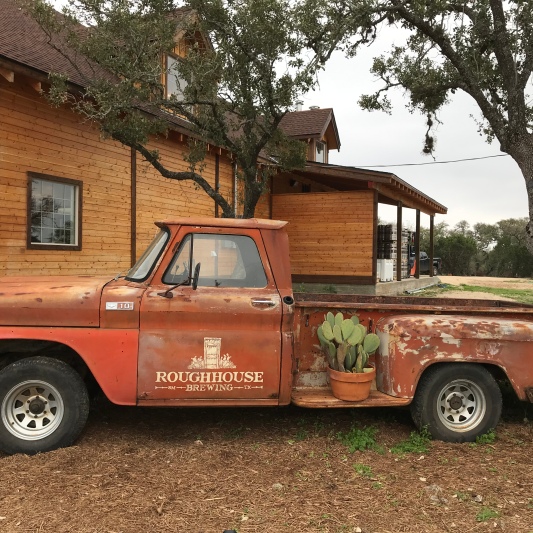