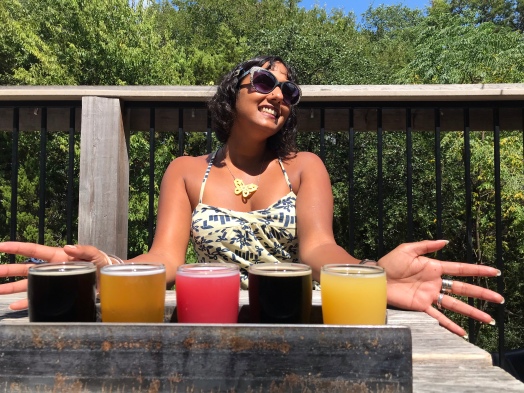 The North-East Austin suburb of Cedar Park may not be high on most visitors’ radar, but most Austinites will know someone who lives there even if they don’t themselves. Close to our very own mini-Silicone-Valley, Cedar Park is a predominantly family-focused neighbourhood that’s a far cry from the hipster bustle of East 6th, but fortunately, as this is Austin, it has not been neglected in the beer department. As well as stalwart brewery Whitestone (for which there will be a separate entry), the English-style Dig Pub (where they serve Scotch eggs!!) and the shiny new Brewtique drink-in bottle shop, Red Horn Coffee & Beer are flying the beery flag for Cedar Park.

As we are in the suburbs, it should come as no surprise to find Red Horn, like most other businesses, located in a low-rise mall. Being tucked into the corner of the lot and backing out onto a little bit of green-space gives Red Horn’s small beer garden more ambience than you might expect, and on a warm day it makes a nice spot to sit out with one (or many) of the substantial array of brews on offer. Red Horn has a whopping 32 taps, of which no less than 16 hold their own beers, a reason in itself to get out to Cedar Park. We’ve visited Red Horn several times now and I am always impressed with both their own beers and the nicely curated list of guest taps, mostly local Texas breweries with a few out-of-states in the mix. We have also had the chance to try a decent number of their beers (I’m counting 26 at present), far more than I would usually have had before writing up a brewery, which suggests negligence on my part and a high turnover on theirs.

Red Horn has a solid core range, but they’re not afraid to push the boat out and think outside the box when it comes to their experimental seasonals. In my opinion, these have mostly been highly successful. My love for dark sours was properly indulged by their superb Rum BA Suburban Ninja Stout with brett, cherry and boysenberry, and their Poptart Ravioli Kettle Soured Wildberry Milkshake Ale sounds like it should be absolutely hideous but was actually a juicy, crushable dream in a glass. Beers like their fresh, chewy More Better Peach Cobbler Milkshake DIPA and brightly tart Friendship Nuggets NEIPA with Passionfruit could (and would) have fallen foul in less capable hands, but the folks at Red Horn seem to know how to hold back sufficiently to be crazy without being insane, if you know what I mean. Being a coffee shop as well as a brewery, you can also count on getting a decent coffee beer or two – my favourite is full-caffeined Barista Theory: Pour Over Stout. Of course, it would be impossible to put out such a high volume of experimental brews without a few turning out a lil iffy, but such is the way of the world – nobody’s perfect. In a city where most breweries have a dominant brewing style and identity, it’s fun to visit somewhere where you never know what you’re going to get (to paraphrase a vastly over-quoted movie, sorry).

Two other things to note about Red Horn – the first being it is busy. Opening from 7am to 10pm on weekdays and 8am to 11pm on weekends the dual-identity thing ensures that there are always people requiring one or the other of their services, and with so much housing around there are, indeed, a lot of people. Red Horn’s interior is definitely more coffee shop than bar, but if you’re planning to take your laptop and work be sure to get there early to get a good seat – the stools do not have backs and are not comfortable for long periods. Also, Red Horn is expensive, especially by central ATX standards. Beers are priced individually and even their own start to rack up hard if you like your high ABVs. We once spent $50 there in one go without even eating anything, which is a bit bonkers. If you plan to go regularly be sure to sign up to their rewards scheme – something is always better than nothing! Red Horn have crowlers to take away and you can find their brews at craft beers bars around the city. If you are in Cedar Park, I would make visiting Red Horn your beery priority – just make sure you go after you get paid. 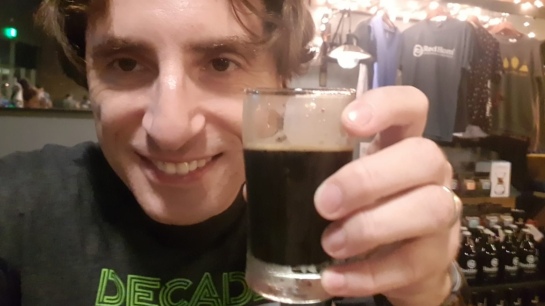