We chose the south end of the Ozarks as our vacation destination for lovely JB’s 40th birthday because it promised scenic drives, cute small towns, hip record stores and, of course, a thriving local beer scene. It’s also just eight hours from Austin, a nicely manageable long-weekend journey time. Best of all we were promised blissfully cool Autumnal temperatures, leaving us delighted at the prospect of slipping into boots, trousers and yes – jackets! Back in March this would have sounded like crazy talk, but after six months of scorching Texas summer with no end in sight, we’ve been craving a blast of cool air that isn’t out of an A/C vent and the breezy hills of North-west Arkansas offer just that.

I was excited to discover that the folks at Experience Fayetteville take beercationers seriously and have created their very own Ale Trail, complete with stamp-collecting passport. Naturally, being the uber-nerd that I am, I had these delivered well in advance of our trip, but we were pleased to note that, as well as the tourist office, most of the breweries had copies on site. Unfortunately, despite our best efforts we ended up just one stamp short of completion ( Ivory Bill – next time!), but did manage to hit up a not-unimpressive 12 taprooms from the passport – plus an extra one that potentially should be.

The trail includes taprooms in the wider Fayetteville area, including the surrounding towns of Springdale, Bentonville, Rogers and Siloam Springs, to ensure that you always know where your nearest brewery is as you explore the pretty town squares, impressive art galleries, local shops and leafy scenery of Northwest Arkansas. The Fayetteville beer scene is, in the most part, made up of breweries serving locals, students and tourists their own spin on the more popular styles – this isn’t a hub of hipster innovation and if you’re looking for sour or spontaneous-ferment beers you’re best off heading back to Oklahoma. That said, we found enjoyable libations at every stop along the way and had lots of fun exploring each local area and its taprooms.

We hit up Springdale’s Black Apple Cidery taproom as soon as we arrived into town, and although their interior was closed due to Covid, they have a spacious back patio where we enjoyed our first taste of the brisk Arkansas breeze. Black Apple produce extremely high quality ciders (with price tags to match), and were impressed with all four of our flight selection. I was particularly enamoured of the dry, vinious, mineral-forward Citra Sauv Blanc, whose notes of white pepper went down an absolute treat. 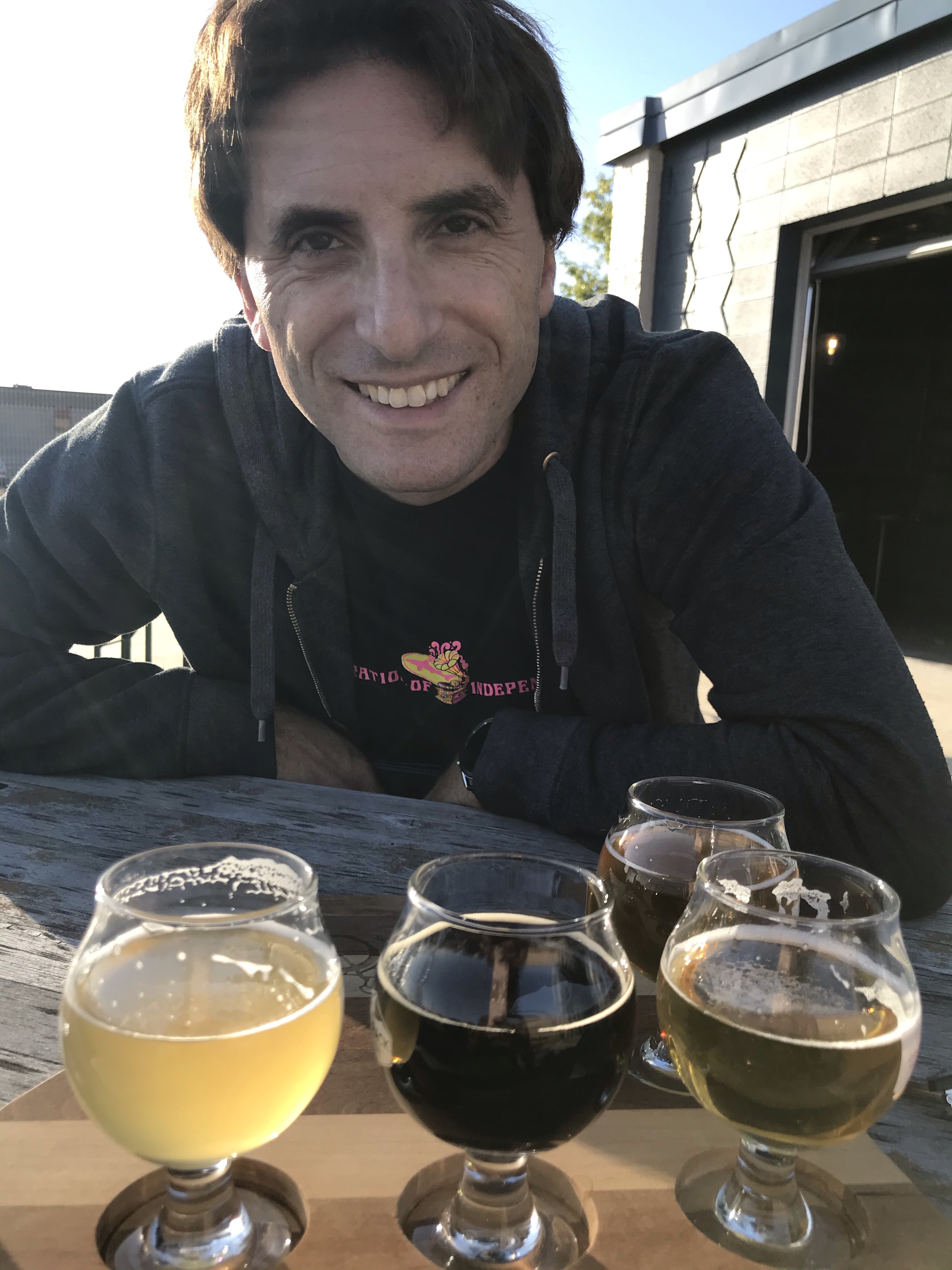 Our next stop was Bike Rack Brewing, whose Springdale taproom is just a short walk from Black Apple. With their HQ in Bentonville, close to the Crystal Bridges galleries, this smaller satellite branch is also a coffee shop (with coffee cocktails – important to note)and has a simple patio with a view of Springdale’s vintage trains. My beer of choice, unusually for me (not always a grapefruit fan), was the Grapefruit Farmhouse Saison, which channelled its citrus bite into a nicely spritzy yeast-funky finish. FYI there is an actual bike rack. For actual bikes. It is not decorative, as we originally presumed. Ahem. 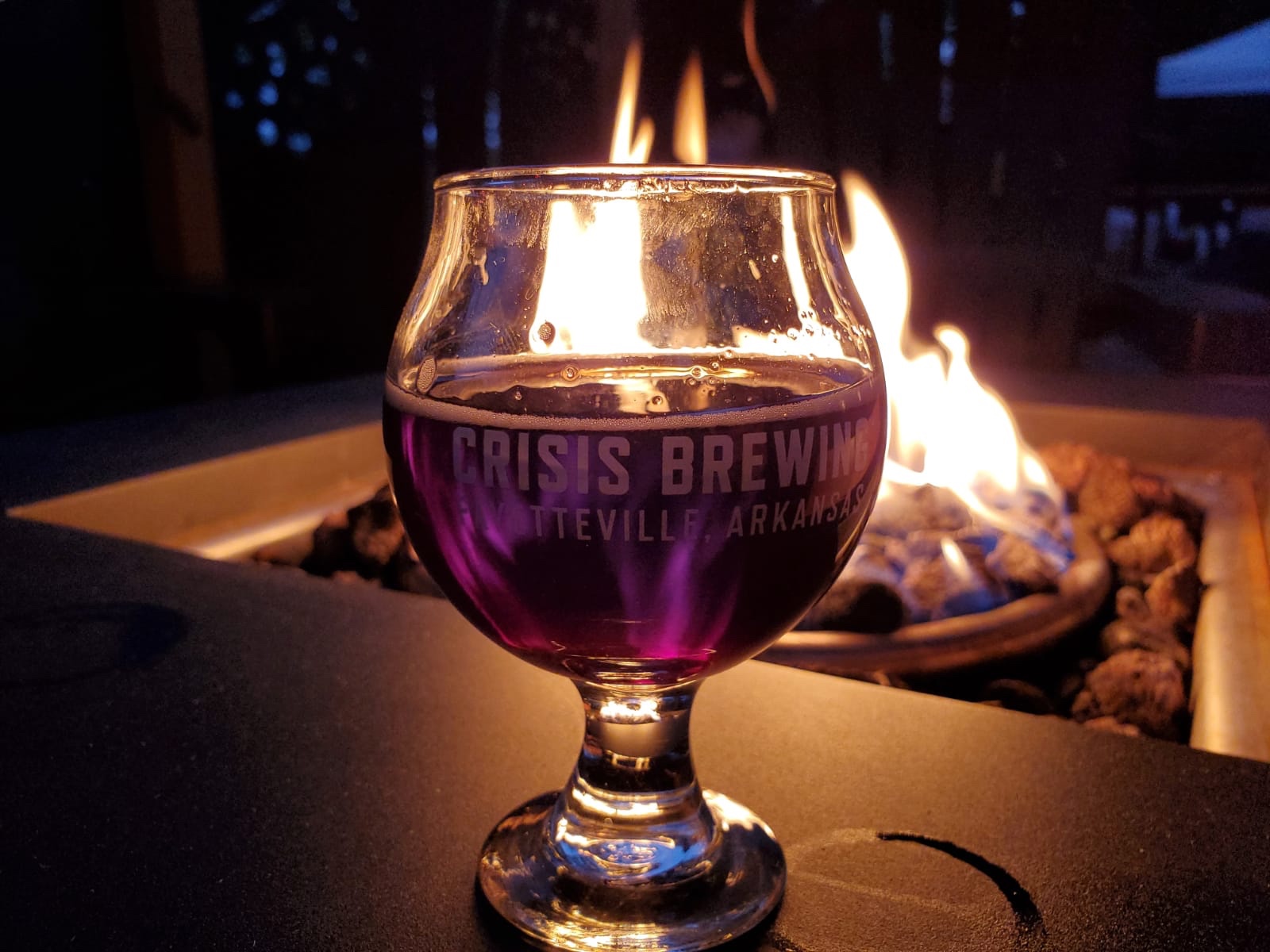 We then headed south into Fayetteville for a visit to Crisis Brewing, whose lovely cosy taproom made an excellent impression. With toasty fire-pits and an abundance of potted plants, Crisis is a great place to settle in and hang out. The taproom was correspondingly busy but we were able to snag a fire-pit spot which was especially welcome as the sun went down. The deep, dark caramel-malty Boland’s Irish Red was our pick of the bunch.

We moved on to the dinosaur-themed Fossil Cove Brewing taproom, a large industrial space with no less than 14 beers on tap. We picked up some rather tasty (if a lil pricey) Wicked Wood pizza (that said, get the sourdough base – it’s worth the extra $) and kept our coats on as the Arkansas night settled in. I was exceptionally taken with the T-Rex On Peaches Evolution Series 3.3 – their regular T-Rex Tripel BA with fresh local peaches to create a deep boozy oakey-smoky delight of a brew that I would highly recommend. 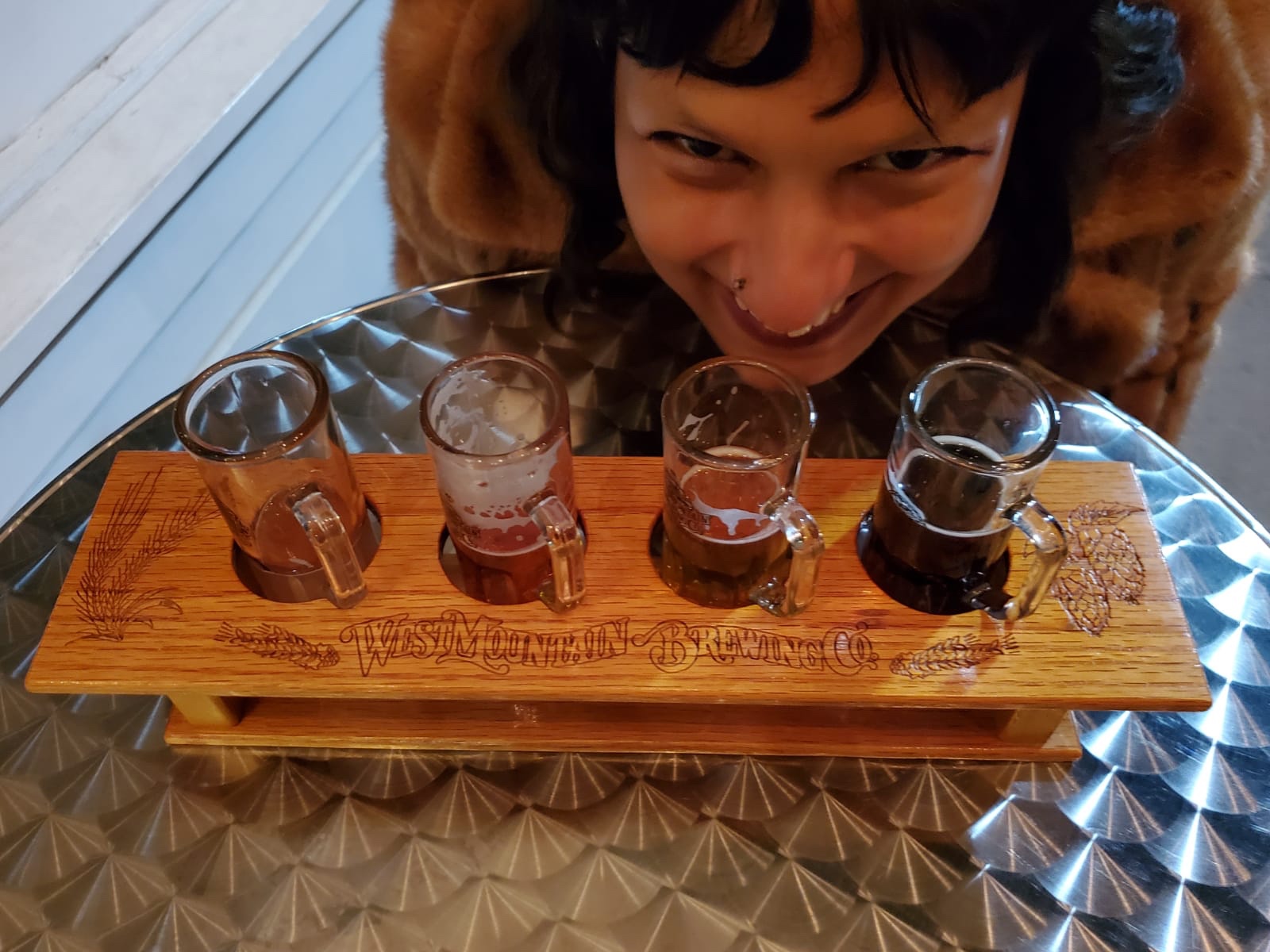 We made a final stop at the West Mountain Brewing taproom, located right on the Fayetteville main square, where we were able to squeeze in one more flight while enjoying the lush, verdant view. Fayettevile take their foliage seriously, and the square is chock-full of plants and flowers – very different from the imposing Texas court houses that we’re used to. Our flight came is super-cute mini-tankards, and I especially enjoyed the soft, fresh and super-smashable juicy Blackberry Wit.

The following day saw us out and about on a drive through the Pig Trail Scenic Byway, a much-vaunted road for drivers and motorcyclists keen on twists, turns and steep gradients, as well a route used by Confederate soldiers during the Civil War. To us Brits, it was oddly reminiscent of forests of our own, although we did enjoy the sudden hairpin bends. The hour-long route ends in the small town of Ozark, where we hit up the very friendly Ox Bend Brewing taproom – nb this is not on the passport. We enjoyed samples of five tasty brews on their sunny deck, and I particularly liked the dark, nutty molasses-forward Purty Mouth Stout – very easy-drinking for 8%, and the super-refreshing, crisp citrusy zing of the 140 Blonde Ale. Definitely worth a visit.

We headed back to Fayetteville, paying a swift visit to Columbus House Brewing, who unfortunately weren’t serving flights or small pours due to Covid. Their simple gravelled dog-friendly patio was comfortably lively, and we broke out our jerseys as the sun began to lower, making the full, nutty Spottie Ottie Oatmeal Stout feel like a particularly appropriate beverage.

Next we made our first foray into the nearby town of Rogers, where we hit up the rather hip n swanky Hawk Moth Brewery and Beer Parlor (no less), a very different animal indeed to most of its contemporaries. We were extremely impressed with the beers at Hawk Moth – they tasted careful and sophisticated, including less-common styles and complex flavours. Our particular favourite was the gorgeously lush BA 2020 Anniversary Blend, an English Strong Ale full of rich boozy dried-fruit intensity. I was also extremely partial to The Interurban Grisette which was dry, delicate and delicious. The Somewhere In Between Biere de Garde and Hazy & Hoppy IPA are also both very high quality. A don’t-miss – but expect to pay for what you get. 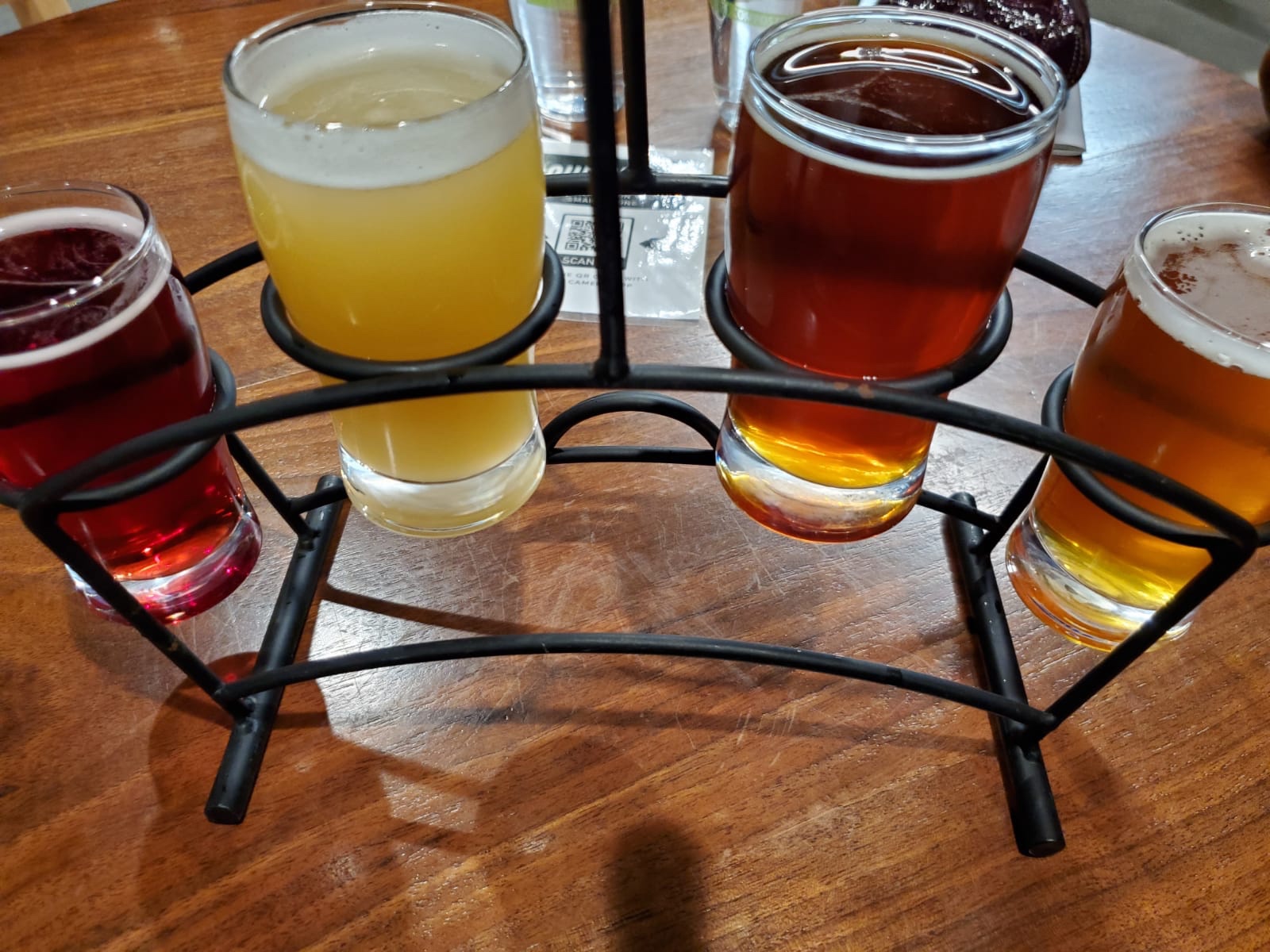 Our last stop for the night was the unexpectedly huge Bentonville Brewing facility – a two-story behemoth that was all clean lines and (distanced) Friday night bustle, although staff still took time to be chatty and engaged. The hazy but crisp lemon of the Space Goose NEIPA went down a treat – I’m really enjoying this new breed of hazies where sweetness is being eschewed in favour of more complex, subtle flavours. I’d also recommend their Lil Wrecker IPA for hit of well-delivered West Coast piney-malt. 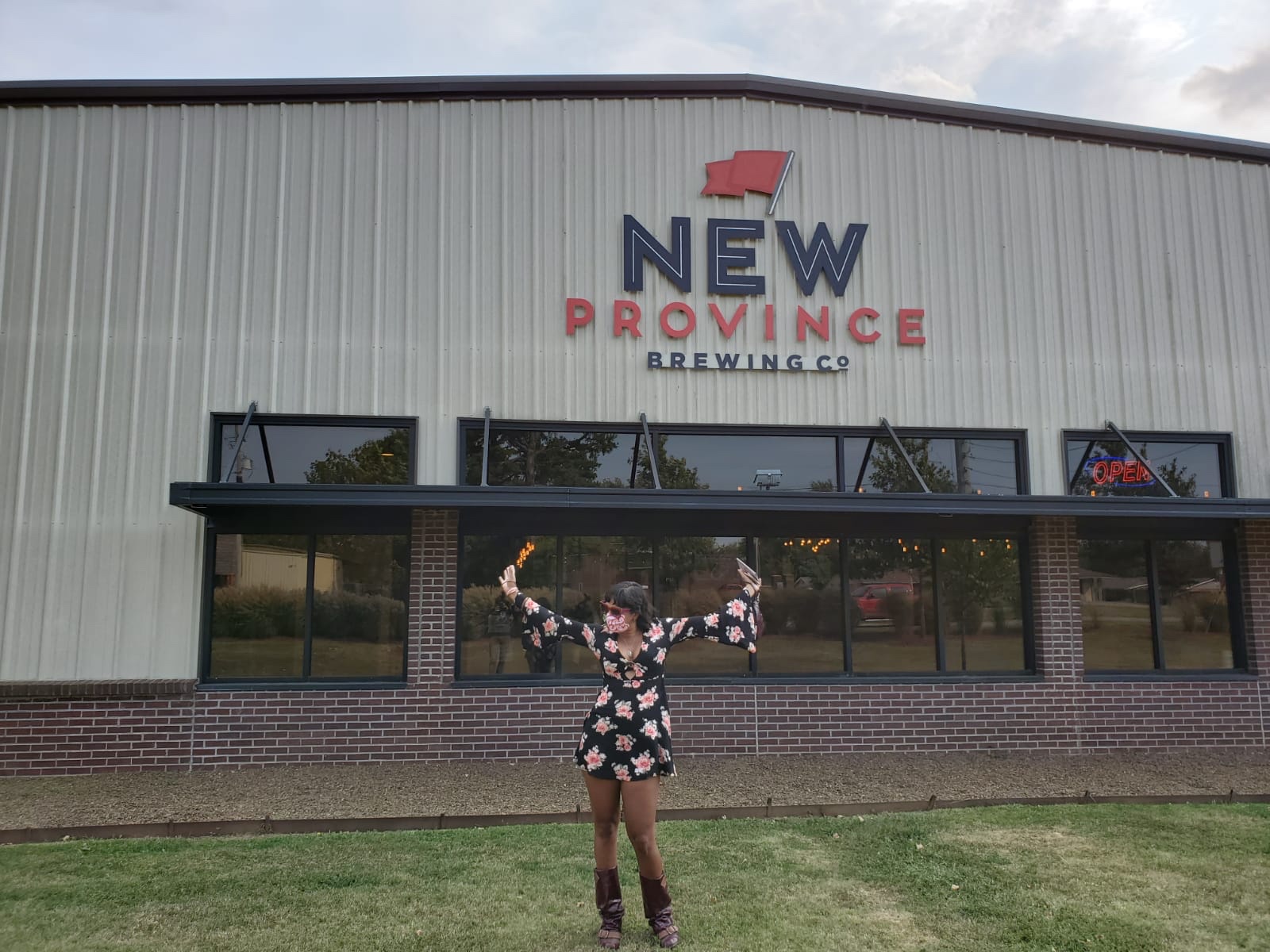 After a super-cultural morning exploring the Crystal Bridges galleries in Bentonville (highly recommended), we hit up New Province Brewing back in Rogers, where we had the pleasure of trying a couple of their special-release deconstructed BBA Cafe Muy Especial Imperial Stouts. We were very excited by the deconstructed concept – taking one of their favourite annual brews and making it apart – making four versions each using just one of its key ingredients. Although we weren’t able to try the original beer (it being long sold out) we settled for two of the deconstructeds, although aficionados may have preferred the full flight. Nonetheless, we were happy with our choices, and I was a big fan of the deep, intense and potent coffee version in particular, although the warm, subtle sweet-smoke chipotle was also excellent. I would also highly recommend the Commoner – a blend of Amber Ale and Kentucky Common that absolutely melts in the mouth. 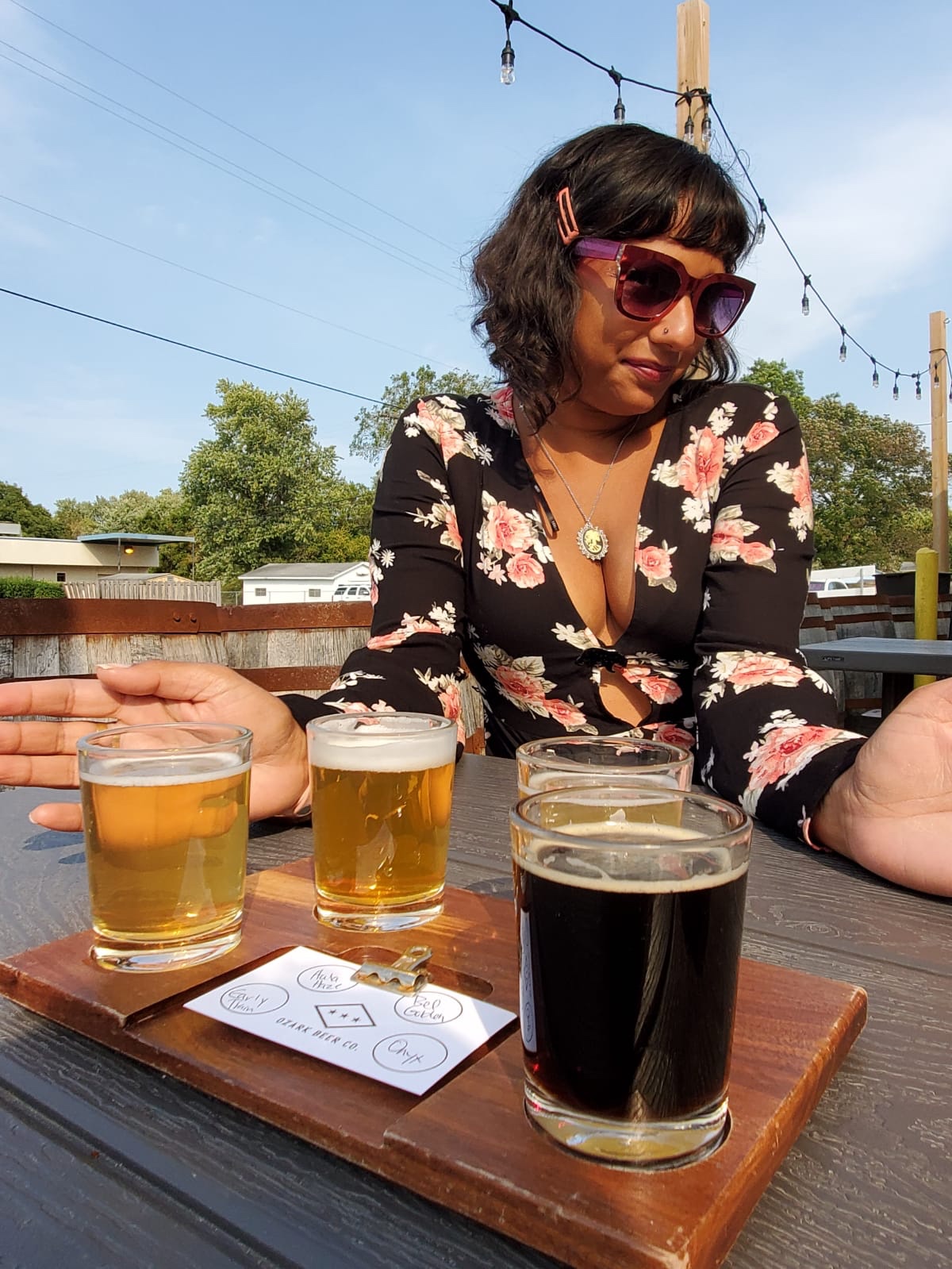 Next up was Ozark Beer Company, a local staple, although their taproom is, rather unfortunately, currently in the middle of a building site. Stick with the core beers here – the sweet-citrus refreshing Lager, smooth, coffeeish Cream Stout and gluggable, flavoursome session-weight IPA all go down very nicely (and help to block out the sound of the drilling!). They also have a cool, rustic interior with enough bits of dead animal to please me, although capacity is currently limited due to Covid.

Located outside Springdale, Saddlebock Brewing is worth the extra drive. It’s a very local spot right in the countryside, and their upper deck offers lovely views of the surrounding hills and fields. Folks are super-friendly and, unlike most Northwest Arkansas breweries, they have their own kitchen, so you don’t really have an excuse to leave! Flights of six come in cute tin trays, and I’d be sure to order the nicely balanced Oak Vanilla Bourbon Porter – far too moreish for a 10% brew! 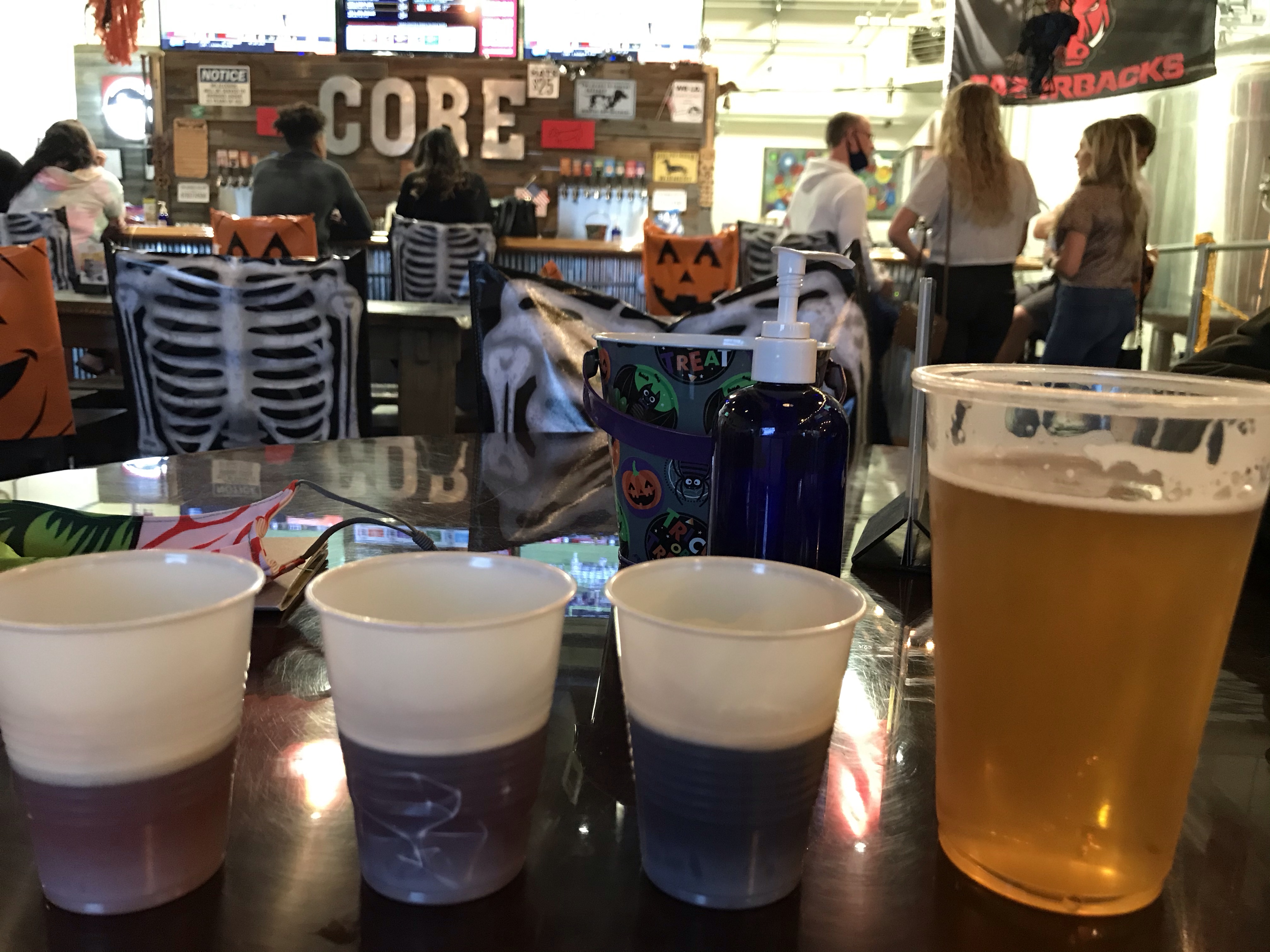 Back in Springdale, we visited our final Ale Trail stop, the Core Brewing and Distilling Co. Their taproom is a curious mix of cafe and sports bar, but with $2.50 pints all day every day, you may be less concerned with your surroundings than usual. Ahem. My top pick was the super-fresh, smooth and flavoursome Hazelnut Brown which went down an absolute treat and was perfect for the crisp, mild climate.

So there you have it – 13 taprooms in two-and-a-half days, and a lovely scenic mini-beercation!