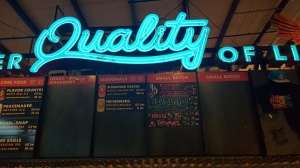 In the seven years since the first Fire Eagle IPA landed, Austin Beerworks has risen steadily to become a city-wide institution. Indeed, you would be hard-pressed to find many drinking establishments that don’t stock at least one of their core range, their hugely successful Pearl Snap Pilsner and said Fire Eagle being the most common choices, although my favourites are the Bloodworks Orange IPA and the Black Thunder lager – look out for them. But don’t let the ubiquity of their beers fool you – these guys are serious brewers with enough skill and imagination up their collective sleeves to stun even the most jaded and pernickety craft beer nerd. It is no accident that in the time I’ve been in ATX I have sampled a mighty 25 different beers from Austin Beerworks (many on multiple occasions), this without attending any special events or brewery parties. This is because they produce new, high quality beers faster than I can change eye shadow. I joke not. 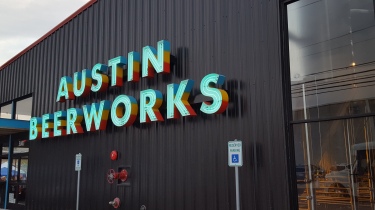 Arriving at the Austin Beerworks taproom is an experience in itself. Enlarged for their five-year anniversary, its now-iconic neon signage promises great things, and the likelihood of leaving after just one flight is slim-to-none. While the main interior has a simple warehouse feel, the astro-turf patio is charming and unusual. A quick glance at the board usually reveals at least four rotating taproom-only specials alongside their core range, and the friendly staff are always up to speed and happy to offer advice. Don’t think that quantity in any way compromises quality either. Their seasonals and limited release beers are more than worth the trip out to North Austin. Some of my favourites so far have been the brilliant, unique Templar Nights stout, made with wine, bourbon and cherry – yes, such a thing is possible, and the stupendous Lazar Salad IIPA. Their Heavy Machinery small batch series is also one to watch out for, especially the DIPA. So, even if you think you’ve done the Austin Beerworks thing downtown, you haven’t. Factor in time for a flight or two under the neon lights! 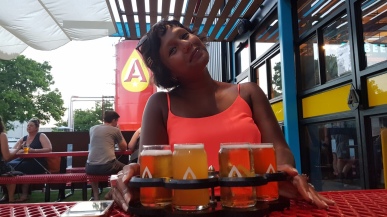 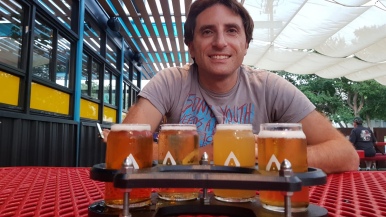 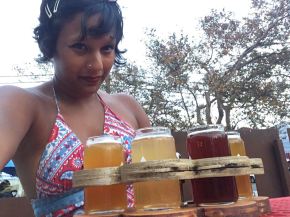