As a huge Blue Owl fan, I was so excited to sit down and chat with Meike about the Austin beer scene. Meike’s journey into brewing and her insights into craft beer growth and development in Austin made for a really fun and interesting interview. Like quite a few ATX beer folks, Meike has a background in tech but discovered a passion and talent for craft beer that, along with a lot of very hard work, has led her to the rather awesome position of Head Brewer at Blue Owl. 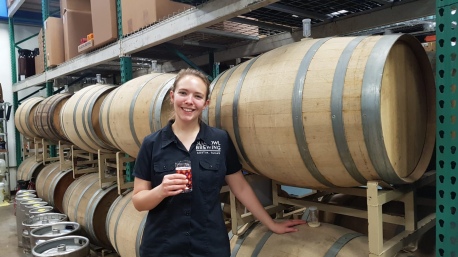 Meike has been working in the Austin beer industry for five years and has been Head Brewer at Blue Owl for just over a year. A native Austinite, Meike left for Seattle when she was six but returned in 2012 after graduating in Computer Science, which led to a two-year stint in software development and data analytics at HomeAway. Having left tech behind to pursue a career in writing, Meike took a brewery tour at Jester King, and was so inspired by then tour leader, later Head Brewer, Averie Swanson’s talk that she went straight out and bought her first homebrew kit. Two weeks later, Meike was drinking her first homemade IPA, and she hasn’t looked back since. Meike started her brewing career with volunteer stints at Jester King, Adelbert’s and Austin Beerworks, then moved into bartending work at Pinthouse Pizza and Twisted X, where she first became involved with production. After working for Armadillo mobile canners, she landed her first role at Blue Owl in 2016, where she moved from packaging into brewing full time and was promoted from Assistant Brewer to Head Brewer in 2018.

Here’s what she has to say…

1) What do you like most about the beer scene in Austin? What do you think makes it unique as a beer city?

‘Austin’s beer scene is great because it’s flexible, dynamic, and growing. We benefit from our geographical location between the two coasts, and we are able to take inspiration from both sides but make something totally our own. For example, a few places in Austin have put out their own takes on different IPAs (West Coast, NEIPAs, Bruts, etc.) and worked to make these styles world class beers without feeling pressure to feel boxed into only making those styles. Austin’s scene benefits from the different influences that people bring to it from all over the US and abroad, which has made it a real hub of science and creativity in brewing. Blue Owl also adds its own uniqueness to the scene as the first and only sour mashed production brewery!’ 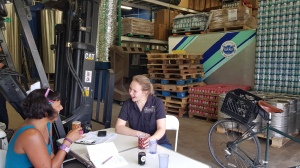 ‘Jeff (Young, founder of Blue Owl) keeps our brewing process very science-focussed and views beer development through a ‘peculiar triangle’ of residual sweetness, bitterness and sourness. We work within the parameters of this triangle to make our beers drinkable and balanced, particularly with our core range. Now that we’ve balanced the triangle, as we grow and develop new beers we’re able to play around more with the flavour components to unbalance the triangle and create more experimental and unusual beers. We’re always learning, and try to keep up to date with the latest research. We’re working on some really exciting new beers at the moment that we’ll be releasing later this year. My favourite part of the brewing process is brewing a beer for the first time – it’s scary, but in a fun, exhilarating way! I love new beginnings and the first batch of each seasonal.’

3) Why do you think the beer scene has taken off so rapidly and grown so fast in Austin?

‘Austin is a really cool place which attracts smart people with strong skillsets who are willing to push boundaries without sacrificing quality. Lots of people in the Austin beer scene have come to the city from different places and are able to be creative and collaborative with what they already know while keeping standards high, which allows for diverse and multifaceted growth. Austin also has a highly educated population of drinkers who know when they’ve had a bad beer and aren’t afraid to say, which is really good for the industry.’

4) Tell me about some of your favourite Austin breweries – where would you recommend to a visitor or newcomer to the city?

‘Blue Owl first of course! Then I have a pretty long list of excellent Austin breweries. St. Elmo has a brilliant food truck and is great at keeping all their beers on point across a lot of different styles. Jester King, in my experience, is the best example of an old-school farmhouse-style brewery in the US. ABGB has awesome pizza and incredible lagers. Pinthouse Pizza to find more great pizza, and the best comprehensive IPA selection in Austin. Austin Beerworks is super-creative with their beers and have such an amazing taproom. Lazarus for their great tacos, queso, and impressive beer selection.’

‘I really want to go to Lager Jam! It’s a dedicated lager festival in late summer, I haven’t been yet but I’m a big fan of crisp Pilsners, especially in the Texas summers. Also, this year Austin was able to host the second ever Pink Boots Conference. The Pink Boots Society (PBS) is a non-profit to support women in all aspects of the beer industry. I got to speak at that event on a panel about sour beers and it was a wonderful way to connect and learn with a lot of cool people from all over the industry.’

‘My top Austin beer are Blue Owl’s Czech Czech Sour Pilsner and Live Oak’s Pils. Ooh, my favourite non-Austin beer is a tricky one! I’ve had a lot of great beers in a lot of different places. One thing that really draws my attention is beer that uses local and oftentimes savoury food ingredients. Last time I was in North Carolina, I was able to visit Fonta Flora for the first time and I was blown away. I love how they used beer and food ingredients so interchangeably. While I was there I had an Appalachian Saison ‘Beets, Rhymes, and Life’ that was simply fantastic.’

7) What beer styles would you like to see more of in Austin?

‘It would be great to see more English-style Bitters and Milds, and cask ales. Hogshead in Denver are exceptional at this, and I would be really happy to see someone doing something similar in Austin.’

8) Are there any problems with the speed of growth of the beer scene in Austin? How do you think the projected 20+ breweries opening in 2019 will affect the market? 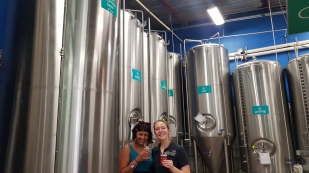 ‘Someone once said, “As long as the brewery down the street is making great beers, then there’s room”, and that’s what I think. As long as quality remains high, there’s no reason to assume that the market is oversaturated – after all, no one ever asks whether there are too many restaurants in town! I think that people are looking for more neighbourhood brewpubs rather than production breweries, and there are so many different styles and options for new businesses to run with. More breweries also mean more jobs, and more people having access to breweries that they can walk to from home, which are both great things. I feel positively about the aggressive pace of growth the beer scene in Austin has at the moment – however, only the best will last. There’s no room for bad breweries, but plenty of space for breweries that are innovative, creative, and make high-quality products.’

9) Do you think the beer culture in Austin is adequately inclusive and progressive?

‘I think the situation in Austin has room to improve. The beer scene is fairly homogenous, but as we grow and diversify that will lead to new ideas and greater creativity, as well as greater depth and breadth of knowledge and talent. At the PBS conference, we were told that women make up 36% of craft beer drinkers but 57% of craft wine drinkers. Imagine if we could convert the women drinking craft wine to craft beer, without losing any of the men who also enjoy craft beer! That would be amazing for our local breweries! If we’re able to bring more gender and racial diversity into the industry then we’ll be able to reach more people from different perspectives and backgrounds.’

10) Where would you most like to visit as a beer-tourist and why?

‘I’d love to travel to the UK and get into cask ale – it’s a living product! I think that would be really exciting. I also really want to travel to Germany, particularly to the German-Czech border area, where there are lots of small family breweries I would love to visit.’ 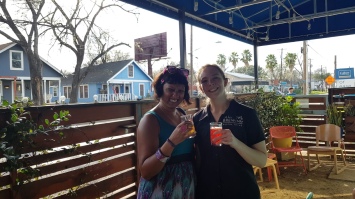 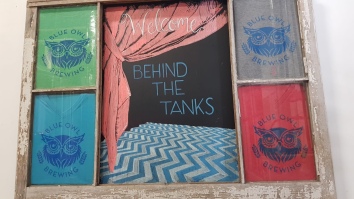 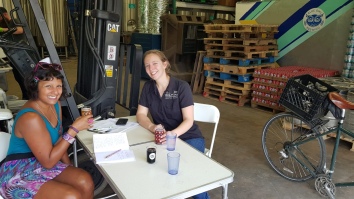